We’ve all gone into restaurants hoping that we get a decent-sized portion for the amount we’re paying. But, what if the chef rolled out a 3,000-pound meatball to the table, or delighted you with the largest mac n’ cheese the world has ever seen?

There’s a whole world of giant food out there that has been designed and executed over the years, breaking Guinness World Records and making headlines. Some were made for charity, while others were simply made to prove it could be done. Either way, they put McDonald’s old Supersize portions to shame! From a 40,000-pound cookie to a 600-pound burger, they don’t come any bigger than this.

We all know that when it comes to snack food, nachos are up there with the best of the best. Some might even say that they’re god-tier, which might be why NorthStar Church in Texas decided it was time to make the holiest plate of nachos ever known. 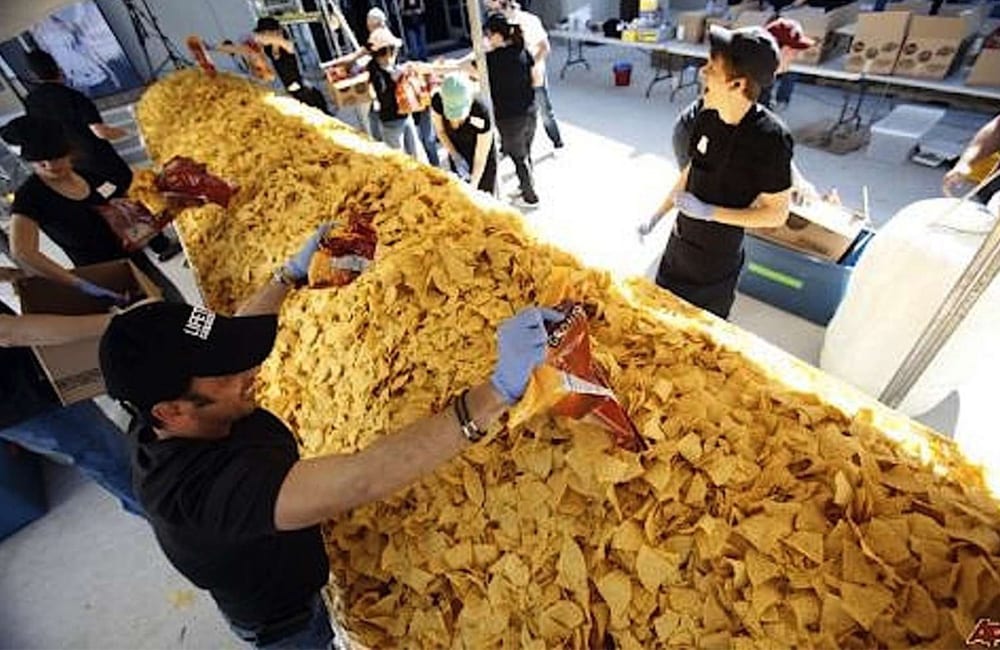 Volunteers made the biggest cheesy nachos dish ever, using tons of Pepsi Doritos to turn the dream into a reality. By the end, it was 3,555 pounds of sheer goodness that was shared among the visitors to the church. Something tells us the collection plate was full that day. 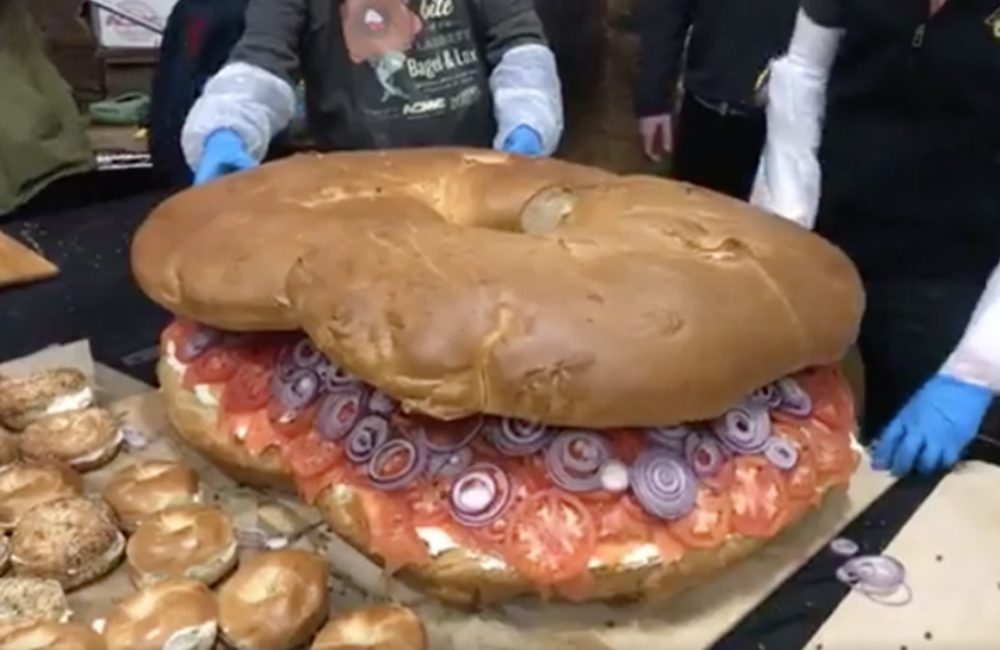 Acme and Zucker’s Bagels teamed up, creating a sandwich that weighed in at two hundred pounds. The sandwich measured 13” x 29” x 36”, and it far exceeded expectations. The ingredients included forty pounds of smoked salmon, cream cheese, tomatoes, onion slices, and capers. Best of all, spectators all got a free slice of the sandwich after all was said and done.

Some giant versions of food actually look appealing, but the same can’t be said for this 50-pound chicken nugget. We love a nugget as much as anyone, but let’s be honest, there’s not really anything that appealing about this creation. 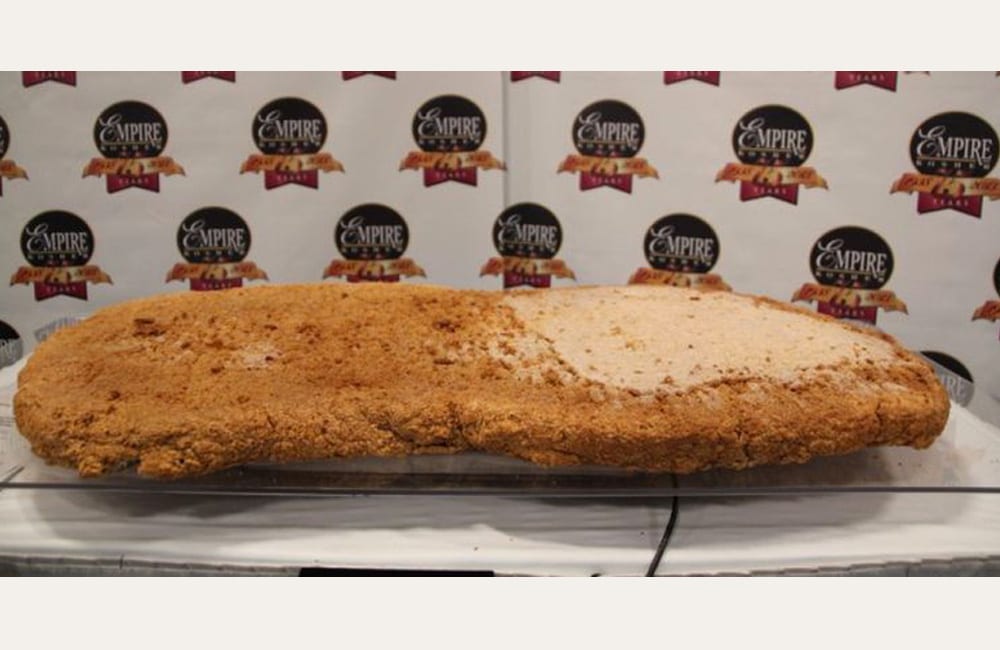 It was made valiantly by Empire Kosher poultry, who set out to smash the world record. They completed their task, blowing a share box of McDonald’s nuggets out of the water with this one. It was allegedly bigger than 700 normal-sized nuggets, which is certainly no mean feat.

Cheesecake is the go-to dessert for many as it’s just so varied. You can get it New York style, strawberry, or with chocolate. It’s such a versatile dish that perhaps it was only a matter of time before someone decided to make a giant version. 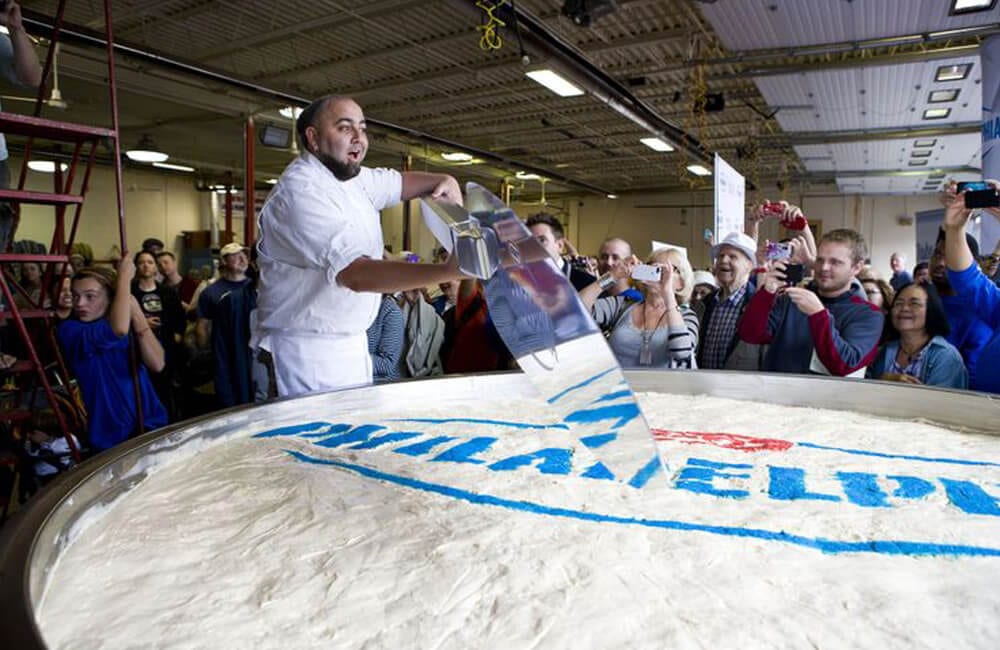 In 2013, Philadelphia Cream Cheese took on the challenge at a local cheese festival, unleashing a 6,900-pound wonder onto the world. This isn’t the kind of thing you pick up in a hurry at Walmart. It was a glorious work of art that contained over 25,000 servings. Not bad for a day’s work, is it?

Pumpkin pie is the staple of fall in a lot of households. Its seasonal appeal isn’t lost on people around the world, although it’s definitely more of an American pastime than anywhere else. One pumpkin pie is never enough, but what about one this big? 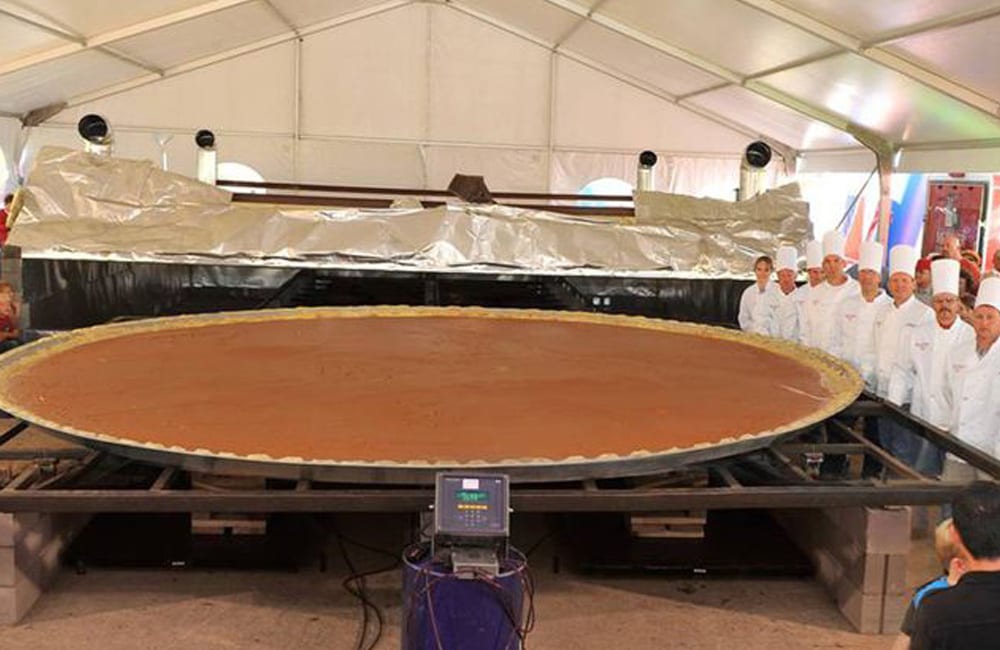 This feat of culinary engineering weighed in at 3,700 pounds when it was created in Ohio over a decade ago. Spanning over 20 feet, it was a shoo-in to scoop the Guinness World Record for the biggest pumpkin pie ever created. Now that’s something for the chefs to put on their resumes!

Not everything that’s giant is actually man-made. It can be grown that way, too. In 2017, one Minnesota man proudly grew the world’s largest carrot to date, tying his name to Guinness World Records forever. 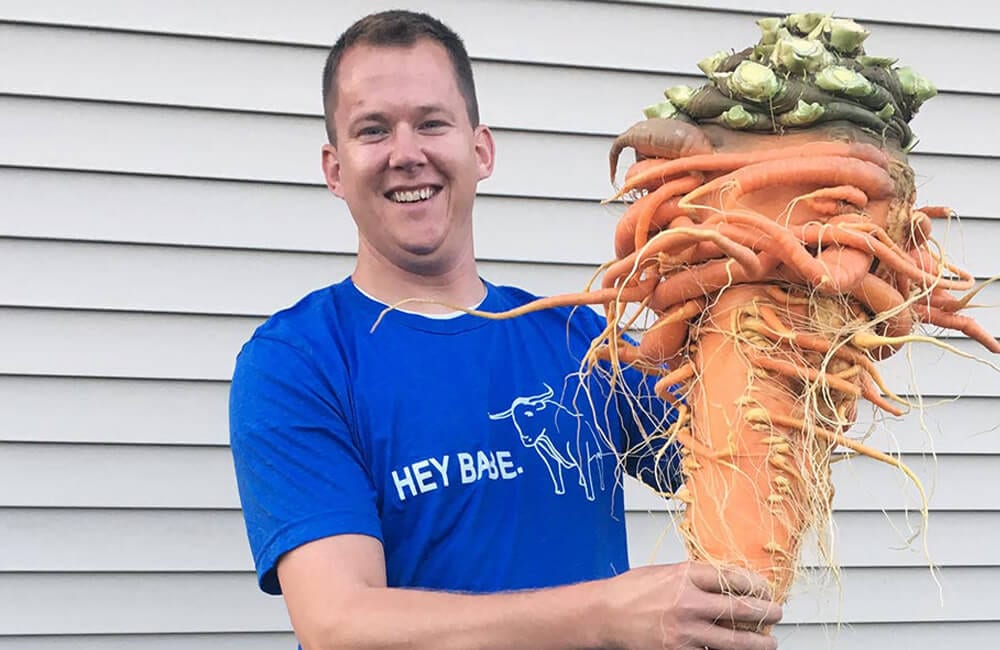 Christopher Qualley managed to rear an orange titan that weighed over 10.17 kg. That’s an impressive carrot if we’ve ever seen one. Can you imagine how many bowls of soup that would make, or how many carrot cakes it could spawn? It’s a natural marvel sent to stun us into submission.

Everyone loves chocolate. It’s the universal language of love. Whether you’re a fan of Hershey’s, Mars, or anything else, there’s nothing quite like a traditional bar. One company called Grand Candy decided to put Armenia on the map by creating a 224-inch, 10,000-pound bar. 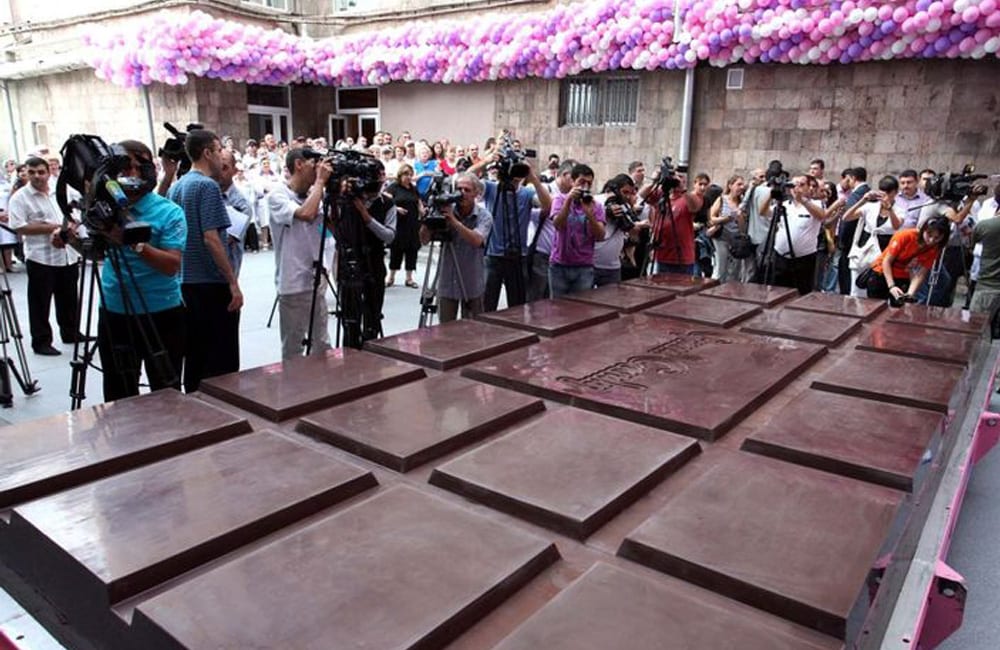 That’s a lot of candy for anyone. Made up of 70% cocoa, the incredible piece of chocolate was actually sliced up and shared throughout the city so everyone could get a slice of heaven. Even Hershey can’t live up to this hype, can it?

Samosas are a delicious snack from South Asia. These pastries are fried or baked, and they’re filled with onions, peas, chicken, spiced potatoes, and lentils. They usually come in triangular or half-moon shapes, depending on where they’re made. 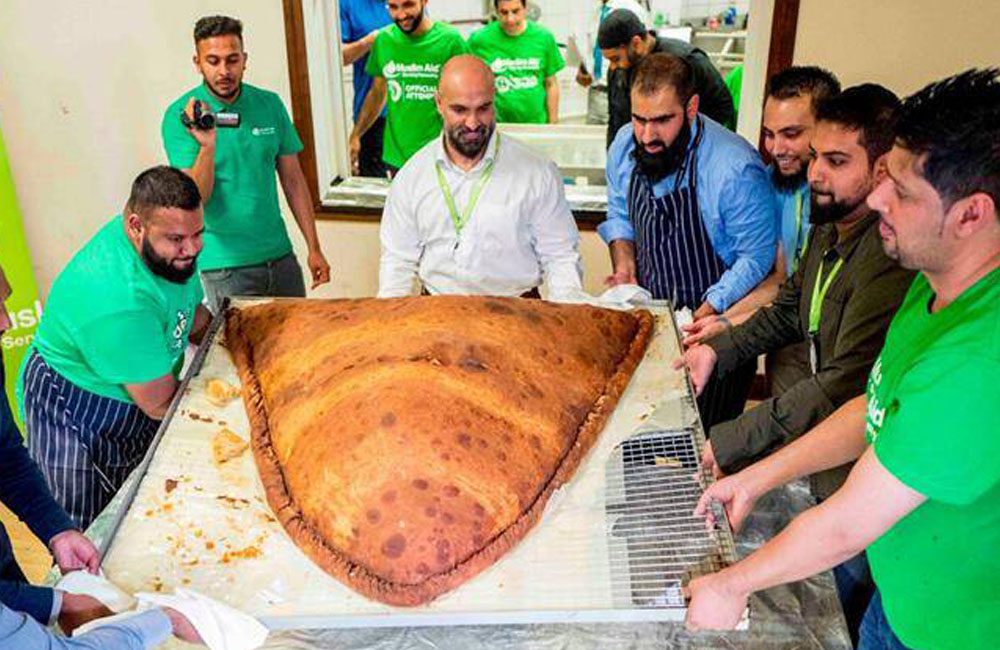 A dozen samosa-loving volunteers from the Muslim Aid UK, a charity in London, decided to attempt the world record for the largest samosa. They succeeded, frying their creation in a custom-made vat at the East London Mosque. They built the samosa on a giant piece of wire mesh before oh-so-carefully lowering it into a giant vat of hot cooking oil. They then lifted out the samosa and weighed it. The samosa weighed in at 337.53 pounds.

Ask anyone what they want from a bakery and the answer will most likely be, “a huge slice of cake.” What would happen if you rocked up with something like this attached to the roof of your car? This giant cupcake was the work of a team in Detroit. 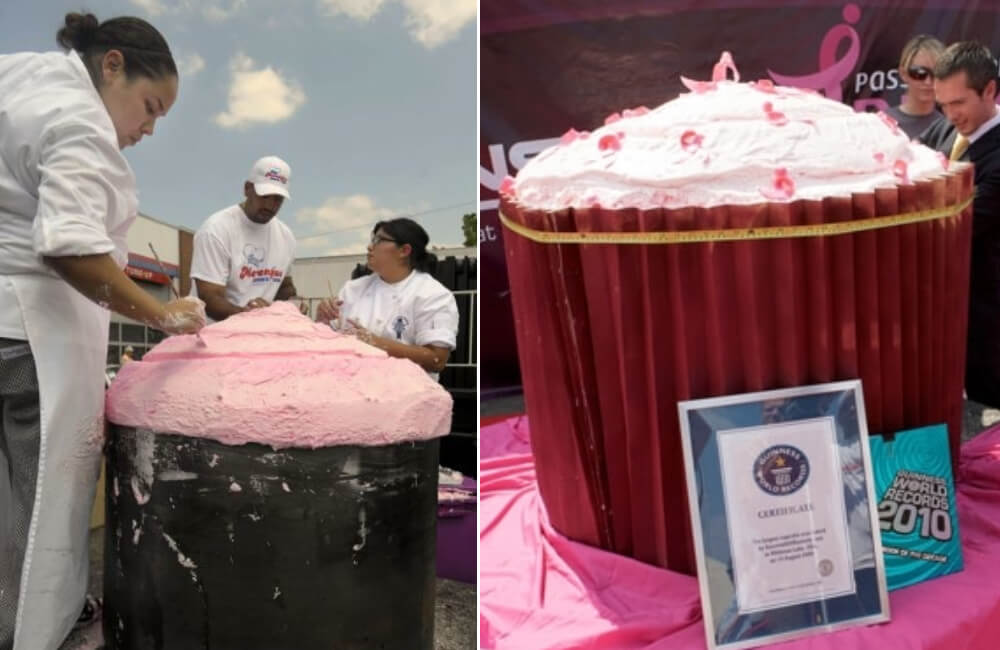 Merengue Bakery and Gourmet Gift Basket teamed up to create this wonder of the modern age, which allegedly took over 1,000 eggs to make. The very sight of it was enough to put Target store-bought cakes to shame. What’s more, it was also part of a philanthropic effort to raise money for Breast Cancer Awareness.

If you’re a fan of cheeseburgers and have $8,000 lying around, hit up Mallie’s Sports Grill & Bar in Detroit, Michigan. The bar created a 1,794-pound cheeseburger and put it on the menu for $8,000. This burger became the largest commercially-sold cheeseburger in the world, propelling Mallie’s to international stardom among fans of huge food. 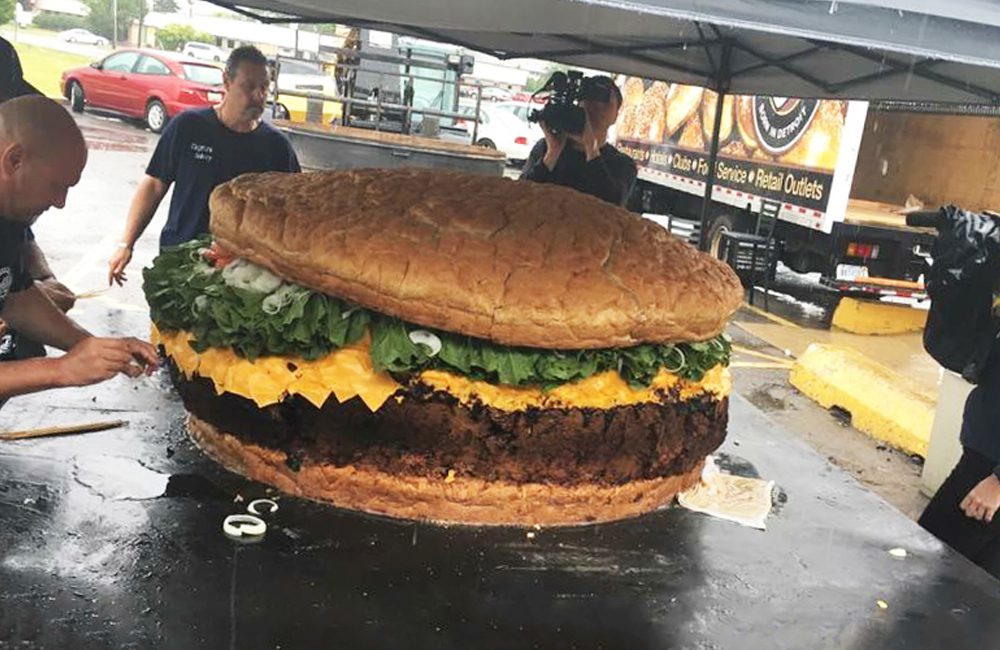 The beefy monstrosity took four years to plan and execute. The bar’s owner, Steve Mallie, began making ten-pound burgers in the 2000s, and, by 2008, he had a taste for competitive burger-making. He briefly held the Guinness record for a 138-pound burger. But, after losing his title to a restaurant in Japan, Mallie vowed to retake his title. And that’s exactly what he did with this artery-clogging monster.

A French chef named Georges August Escoffier invented the chocolate truffle in the 1920s by accident. One of his apprentices accidentally dumped hot cream into a bowl of pricey, chopped chocolate. Escoffier tried to save the chocolate and came up with an entirely new culinary invention: the truffle. Since then, chocolate truffles are the peak of candy luxury. 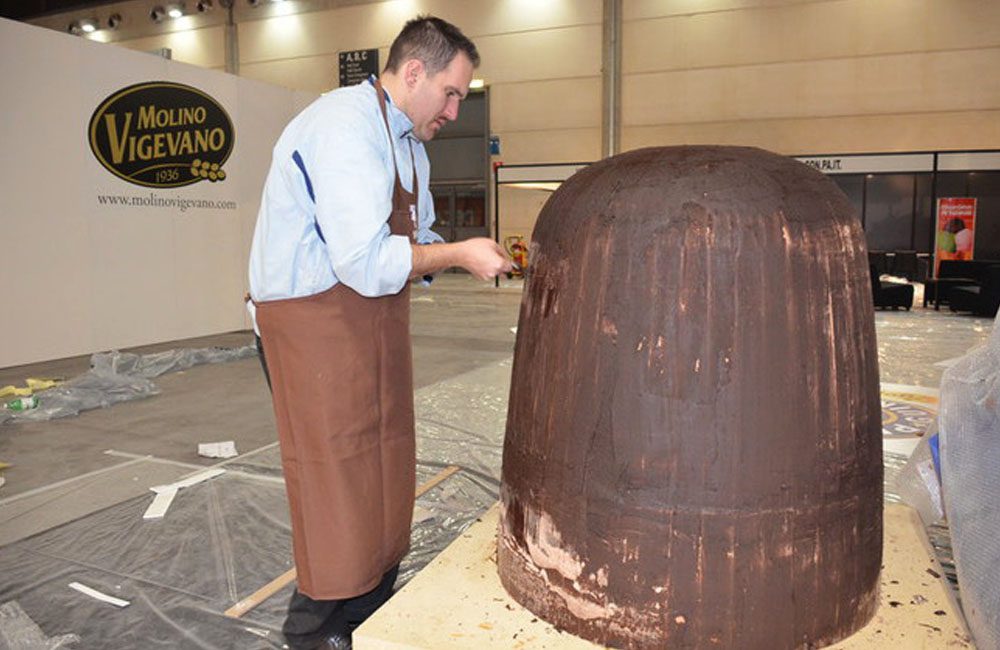 Though a French cook invented the truffle, it is an Italian chef, Mirco Della Vecchia, who holds the record for the largest truffle in the world. Made from dark chocolate, cream, and Amarena cherries, Della Vecchia’s truffle weighs in at 1,768 pounds. This might be the sweetest record-breaker on this list.

Most of us love a good crab cake, but this one would be impossible to finish, even for the most dedicated of crab-eaters. Handy International Incorporated, a seafood-processing plant in Salisbury, Maryland, presented their amazing, 300-pound crab cake at the Maryland State Fairgrounds on September 1, 2012. 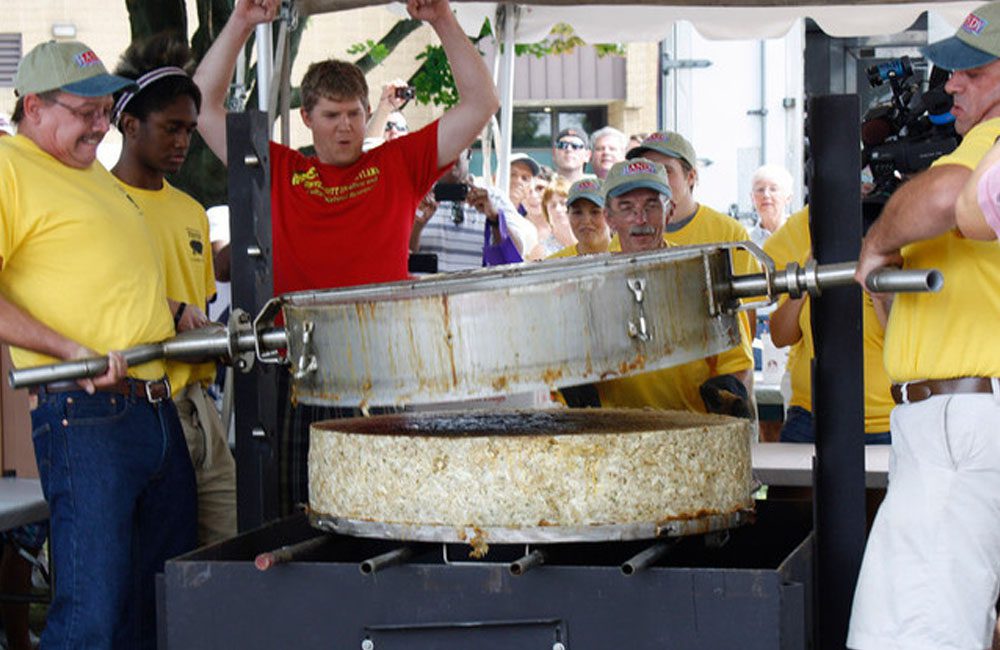 Handy International set out to defeat their previously-held record for a 253-pound crab cake, and they achieved that goal by a country mile. In addition to setting a world record with their fresh blue crab meat, the company also presented the Maryland 4H Foundation with a fat check for $3,127 a few months later. Crab cakes and charity—a winning combination.

When UMASS sets its collective mind to something, it can achieve it. The college decided that it wanted to break a world record and created a team of over 500 volunteers to assemble the largest fruit salad in history. 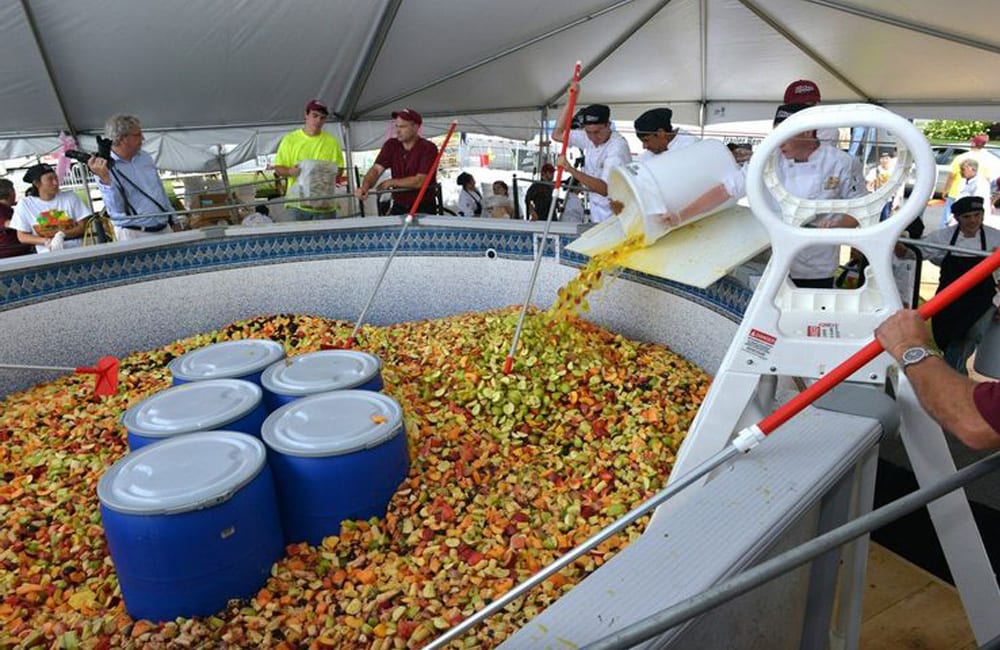 The huge pool contained over 15,000 pounds of diced and sliced fruit that ended up weighing in at over 11,000. It’s still the largest fruit salad ever on record, so it might be some time before anyone tries to beat it. For a start, that’s a lot of fruit that needs cutting. We can almost feel the repetitive strain injury from just looking at the photo.

Southerners love their sweet tea-like Canadian’s love the snow. It’s a well-honored tradition, but making a big jug of it is usually where the line is drawn. However, back in 2010 fast-food chain Chick-Fil-A decided to hop on the tea lovin’ bandwagon and created a 1,140-gallon cup of the good stuff. 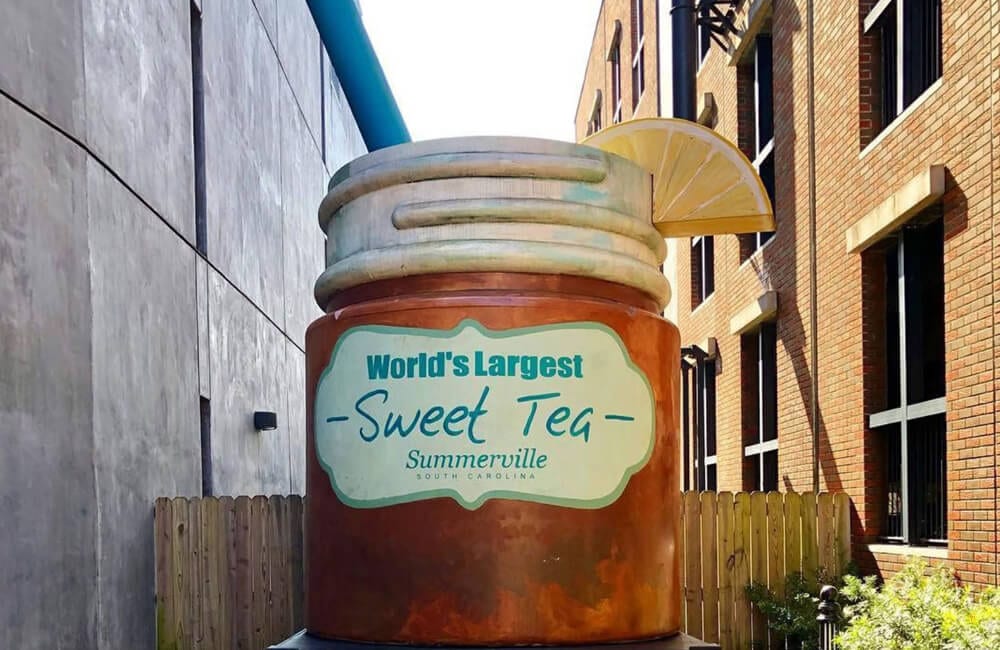 Not one to be outdone, an entire town decided to step in and show them how it was done. Summerville, South Carolina, went one further and created a 2,524-gallon cup of tea. They used a phenomenal amount of stuff, from 210 pounds of loose leaf tea to 1,700 of sugar. That’s one heck of a Kroger bill!