When someone thinks of the word “aircraft,” they probably think of a boring commercial flight to a much cooler destination. However, the aircrafts on this list will prove that idea wrong, as they are all extraordinary. Whether it’s their speed, flight capabilities, or architecture that makes them stand out, these are all groundbreaking pieces of machinery.

And staggeringly expensive, too. For example, did you know that the Lockheed Martin P-791 cost $40 million to build? All of the manufacturers on this list, no matter if they were contracting with governments or building these planes privately, shelled out big bucks to create some of the most interesting aircraft of all time.

Alexander Martin Lippisch was born in 1894 in the German Empire, and when he saw Orville and Wilbur Wright conduct flight demonstrations, he knew that aviation was what he wanted to do with his life. After WWI, he joined Zeppelin, and it was there that he became interested in the concept of a wingless aircraft.

The Aerodyne was a VTOL unmanned aircraft, built for the Federal German Ministry of Defense. The first flight of this single-construction aircraft took place in 1972. Lippisch and his team designed it to be a UAV for aerial reconnaissance. Dornier, a former Boeing competitor during WWII, teamed up with Lippisch to carry out his invention.  The Aerodyne was retired in 1972 because of a lack of government interest.

Designed by Charles H. Zimmerman in the 1930s and built with the help of the Vought Company, The Vought V-173 was nicknamed “The Flying Pancake” for its unusual shape the V-173, as well as the unique VF5U, featured all-wing designs that consisted of flat, disk-shaped bodies that served as lifting surfaces. 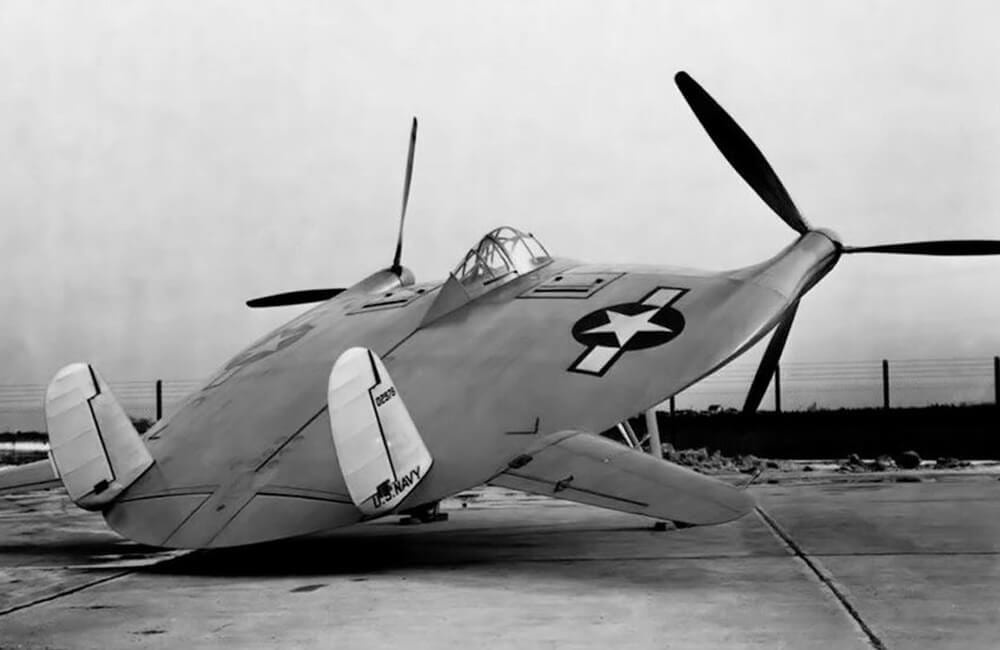 There were two piston engines buried in the plane’s body, which drove propellers that were located on the wingtips. The Vought V-173 was part of a fighter aircraft program spearheaded by the U.S. Navy during WWII. The V-173 flew its last flight on March 31, 1947, after several years of proving Zimmerman’s vertical-takeoff theory correct.

Named after what it kind of looks like, the Pregnant Guppy is made by Aero Spacelines. This large, very wide-bodied cargo aircraft was used for carrying outsized cargo items. For example, the Pregnant Guppy carried components from the Apollo Program. The aircraft was designed by John M. Conroy, who realized he could take a Stratocruiser and extensively modify it to create a whole new aircraft. 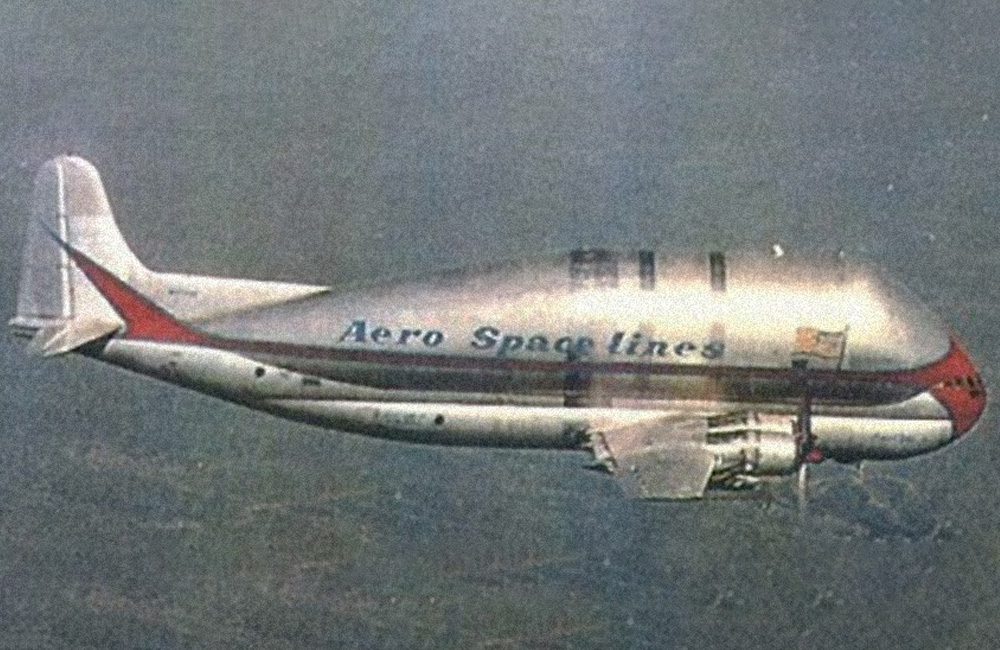 The carrier flew from 1962-1979 when it was retired and later sent to a Van Nuys scrapyard. The Pregnant Guppy’s design would later inspire other giant carriers, such as the Boeing Dream lifter and the Airbus Beluga.

The Northrop Grumman X-29 was an aircraft designed in the early eighties. It tested an all-new concept: canard control surfaces, forward-swept wing, and other new aircraft technologies. The X-29 was flown by the Air Force and NASA. Two were built, and both required fly-by-wire, computerized control because the X-29’s airframe was aerodynamically unstable.

The X-29 was noted for its unique, three-surface design. The forward-swept swings would experience aeroelastic divergent twisting during flight, so composite materials were used to stabilize that and reduce weight. The X-29s first flew in 1984, and they were tested until 1991, when the project was abandoned and both were retired.

The Lockheed Martin P-791 is an aerodynamic hybrid and aerostatic airship. It was designed to be experimental, and it is still under development, all these years later (though, it has been renamed to the SkyTug). Its first flight took place in late January in 2006 at Lockheed’s testing facility in Palmdale, CA. 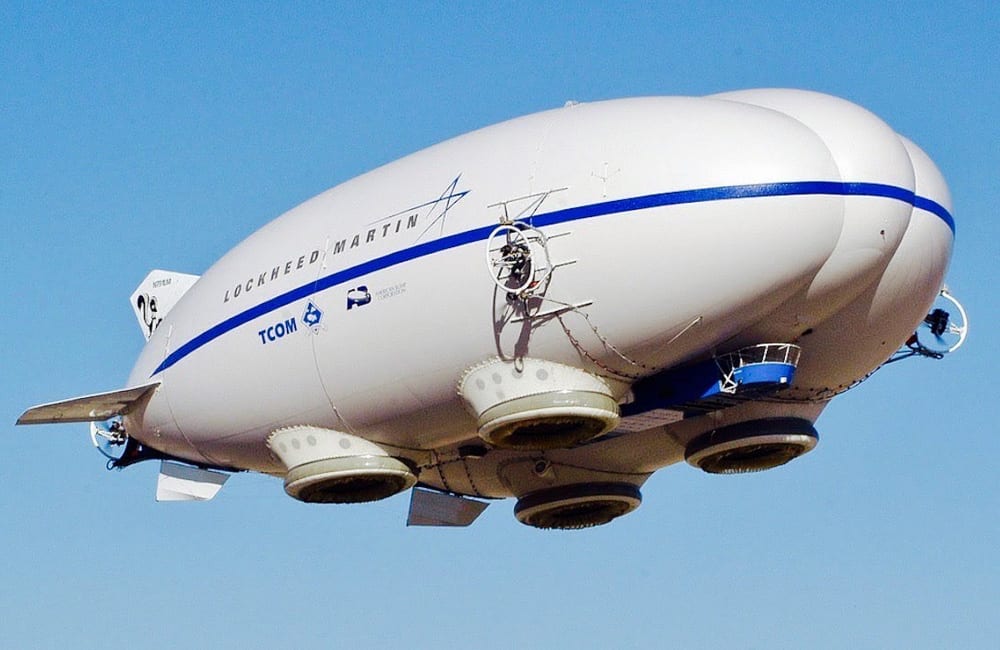 The Lockheed Martin aircraft has a unique tri-hull shape. It has disk-shaped cushions that serve as landing pads. The majority of the ship’s weight is supported by aerostatic lift, and the rest by aerodynamic lift. The P-791was part of the U.S> Army’s LEMV program, but it lost the contract to the HAV-3, by Northrop Grumman. Lockheed is still tweaking the P-791 to see if it can be of any use to the military.

Built during WWII by McDonnell Aircraft, the XF-85 Goblin would survive only as a prototype. It was a parasite fighter. It would deploy from the bomb bay of a Convair B-36. The Goblin would defend bombers like the B-36 from hostile forces’ interceptor aircraft, a function desperately needed by Allied Forces during WWII. 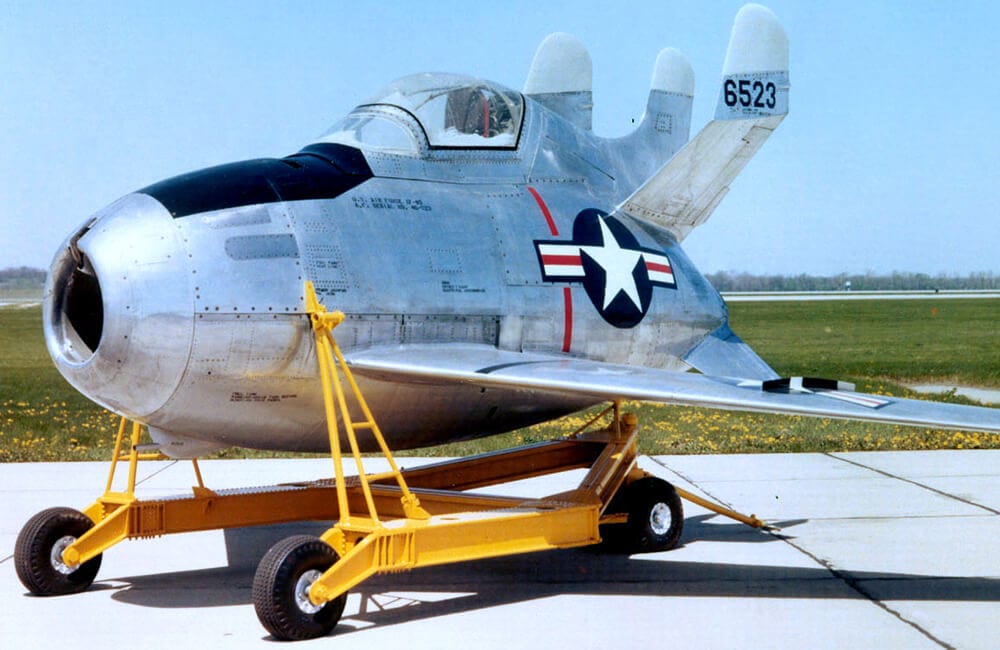 Two prototypes were built by McDonnell before the US Air Force canceled the project the Goblin was promising during the design phase, but its performance was inferior to the jet fighters it would be facing in combat. There were also docking difficulties. Those issues, combined with the expensive $33.2 million program cost, led to its cancelation.

Legendary American aerospace engineer Burt Rutan designed the Rutan Boomerang, an experimental light aircraft that looks like two aircraft melded together and connected by the wings. The Model 202 Boomerang was designed to protect against the failure of a single aircraft engine. The asymmetrical aircraft would provide enough thrust to allow for a safe landing. 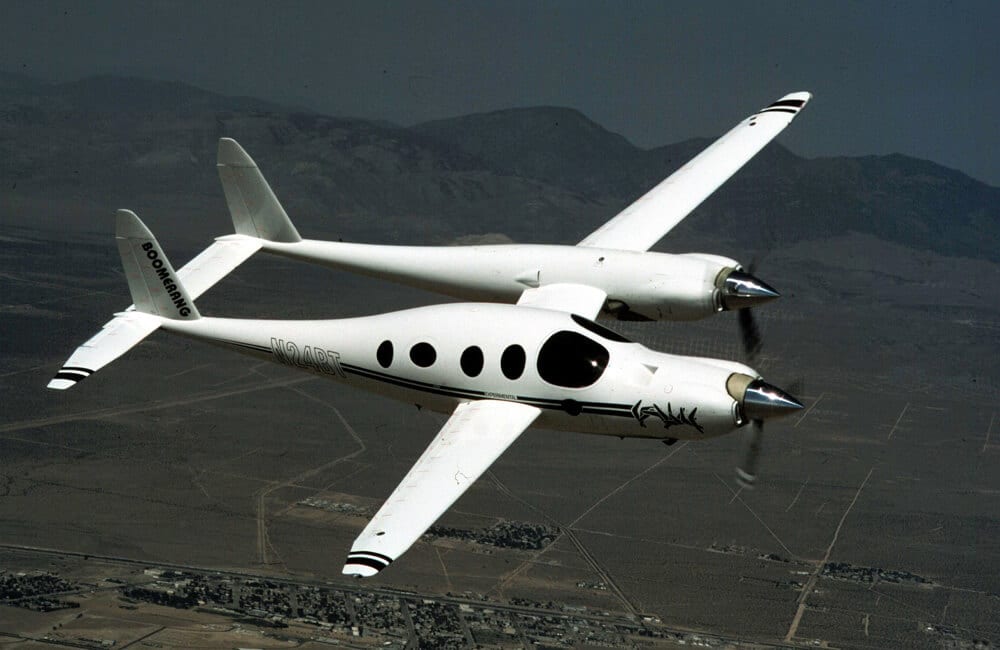 The 202 was designed around two Beechcraft Baron 58 twin-engine civilian aircraft with a budget of $3 million for the prototype.  The 202 has two engines, with the right producing 10HP more than the left. The 202 never was produced on a large scale, but it was restored in 2011. It appeared at Oshkosh’s Tribute to Rutan that year.

The Goodyear Blimp is the most famous Goodyear aircraft out there, but the Goodyear Inflatoplane certainly deserves a mention on this list, as it was quite spectacular. The Inflatoplane seemed improbable at first, but Goodyear’s engineers met their design objectives, though the U.S. Army never ordered any.

The Inflatoplane was an inflatable aircraft made of fabric. It was based on the 1930s rubber glider experiments, conducted by Taylor McDaniel. Goodyear created the Inflatoplane in twelve weeks. The company thought that the Inflatoplane could be dropped in a hard container to soldiers behind enemy lines, inflated, and flown out as a rescue plane. Twelve were made, but the project was scrapped in 1972.

The Tacit Blue was a technology demonstrator. It was created to show that a low-observable, surveillance stealth aircraft with an LPIR (low-probability-of-intercept radar) could operate close to the forward line of battle and still have a high degree of survivability. Only one was built. The Tacit Blue was part of the Air Force’s BSAX program. 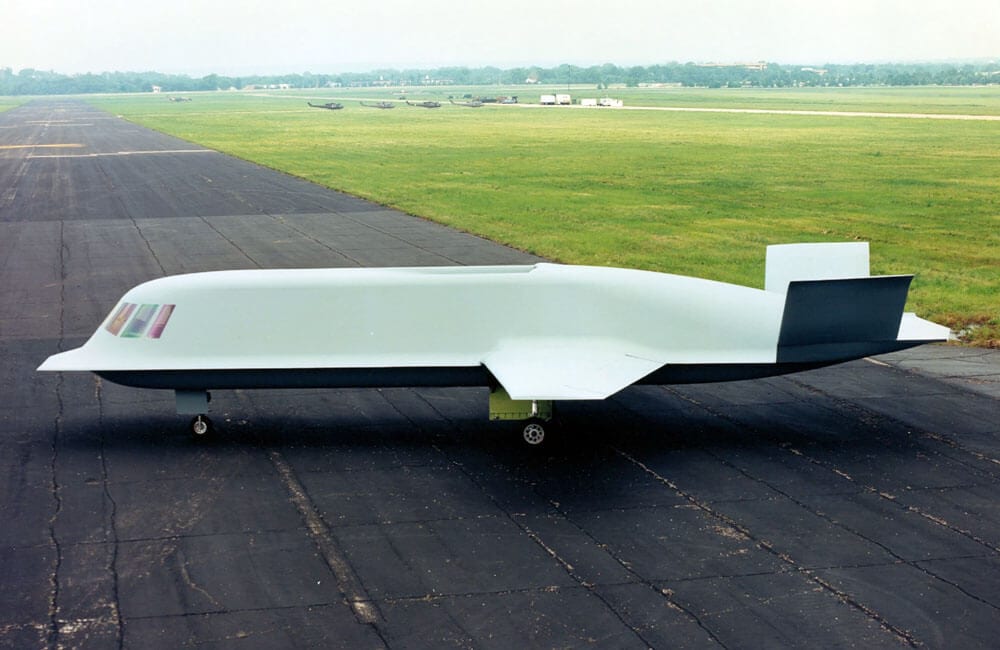 Tacit Blue was the “black” (highly-classified) component. It was nicknamed “the Whale,” as well as “the Alien School Bus” because of its unusual shape. Northrop would use the Tacit Blue’s stealth technology on its B2 bomber. The radar sensor technology in the Tacit Blue would evolve into the tech used on the E-8 Joint STARS planes.

The Kalinin K-7 was an experimental heavy aircraft that the Soviet Union designed and tested during the 1930s. It had twin booms and large underwing pods with machine gun turrets and landing gear in them. There were two versions: passenger and non-passenger. The entire aircraft was welded using KhMA chrome-molybdenum steel. 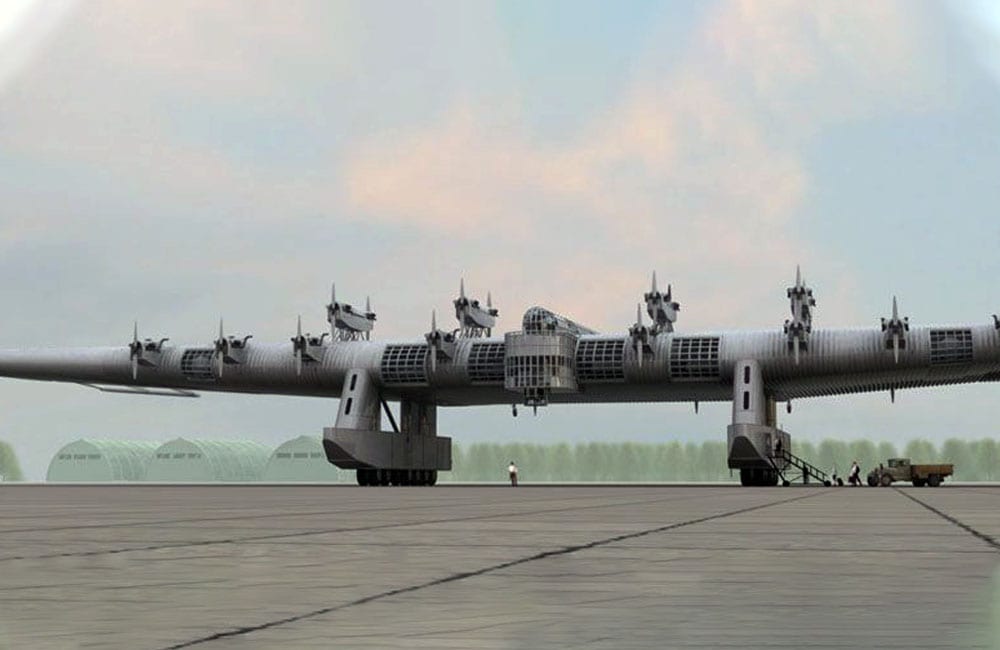 Konstantin Kalinin only ever built one of these K-7s. Kalinin was a former WWI pilot who headed a design bureau, founded around the same time as Boeing, in Kharkiv. The K-7 flew multiple flights without incident until a 1933 crash ended Kalinin’s career. The Russian aviation press still questions exactly what happened to end the aviator’s bright career.

The Caproni Ca.60 Transaereo, also known as the Capronissimo or the Noviplano, was a prototype for a large, nine-wing boat-plane. This flying boat was intended by Gianni Caproni, its designer, to become a one-hundred-passenger transatlantic airliner.  Caproni only made one Ca.60. His company had made a name for itself during WWI building heavy, multi-engine bombers. After WWI ended, Caproni, at just 27 years old, switched gears to focus on the civil aviation market. 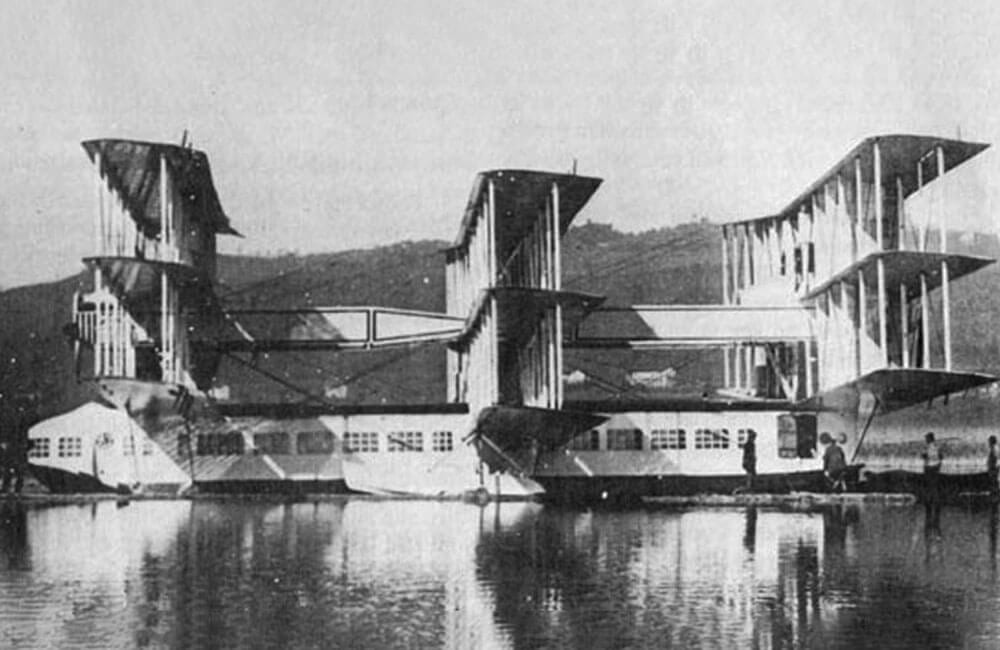 The Ca.60 had three triple-wing sets and eight engines, the same amount of engines as in a Boeing B-52 Stratofortress. The Ca.60 was completed in 1921. It crashed shortly after takeoff and was destroyed. The parts that were recovered are on display at two Italian museums. 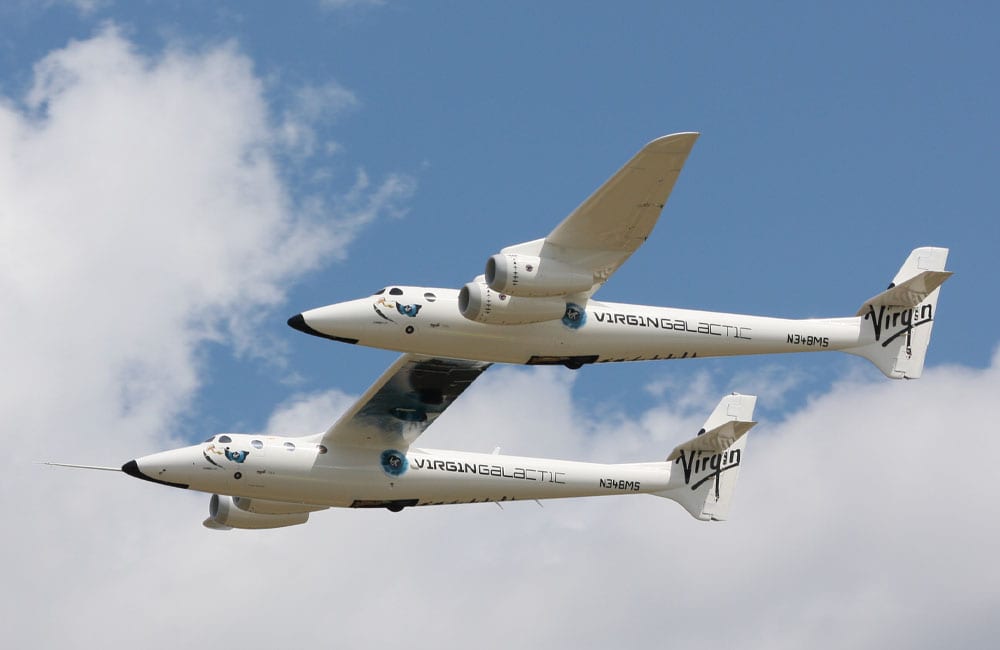 After launch, SpaceShipOne flew a sub-orbital spaceflight, which made it the first private plane to reach space. As one publication put it, the White Knight is the mothership, while SS1 is the parasite. White Knight shares a profile with two modified B-52s, which launched the North American X-15. In 2014, White Knight One was retired.

The NASA AD-1, built by Ames Industrial Co. and designed by Burt Rutan in conjunction with NASA, was the name of both an aircraft and flight test program. The flight tests of the AD-1 were conducted in the late seventies and early eighties. The AD-1 was unique because it had an aircraft wing that could obliquely pivot from zero to sixty degrees during flight. 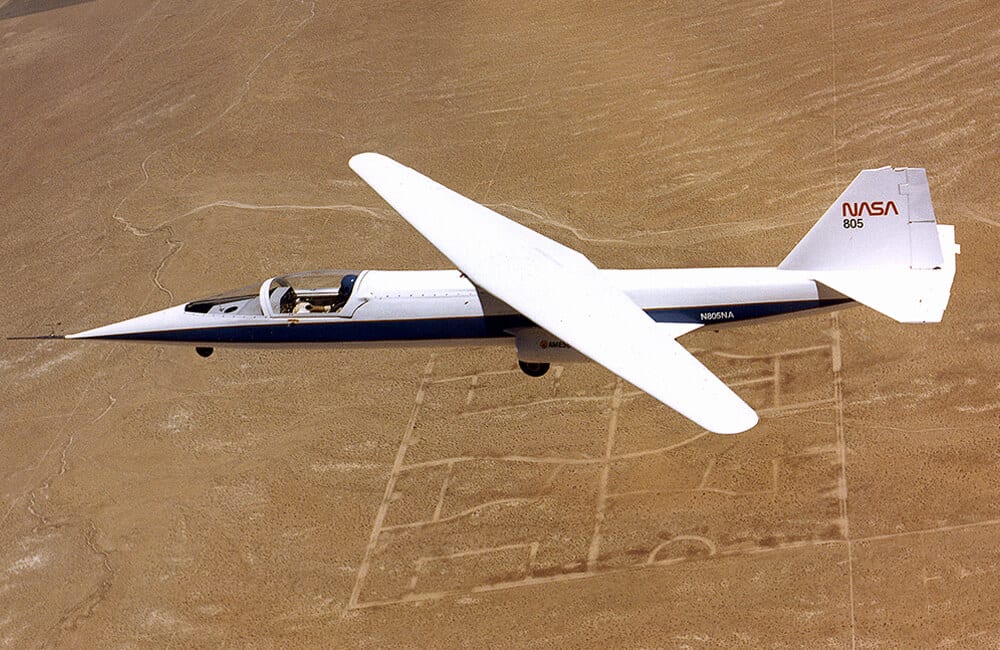 The {{GFF:Ames}] plane flew 42 times during its research program. The plane itself was a jet-powered, small, subsonic research craft that held up well during testing, allowing NASA to gain all the information it needed. The AD-1 cost $240,000 to build (today’s equivalent of $860,787).

The Berkuti was a helicopter aerobatic team that was founded in 1992. This team used multiple Mil Mi-24 planes, often painted in amazing designs, such as the hawk and eagle. The Mi-24 performers are part of the Russian Air Force, often performing at the MAKS Airshow or at parades in Moscow, along with the Russkiye Vityazi and the Strizhi. 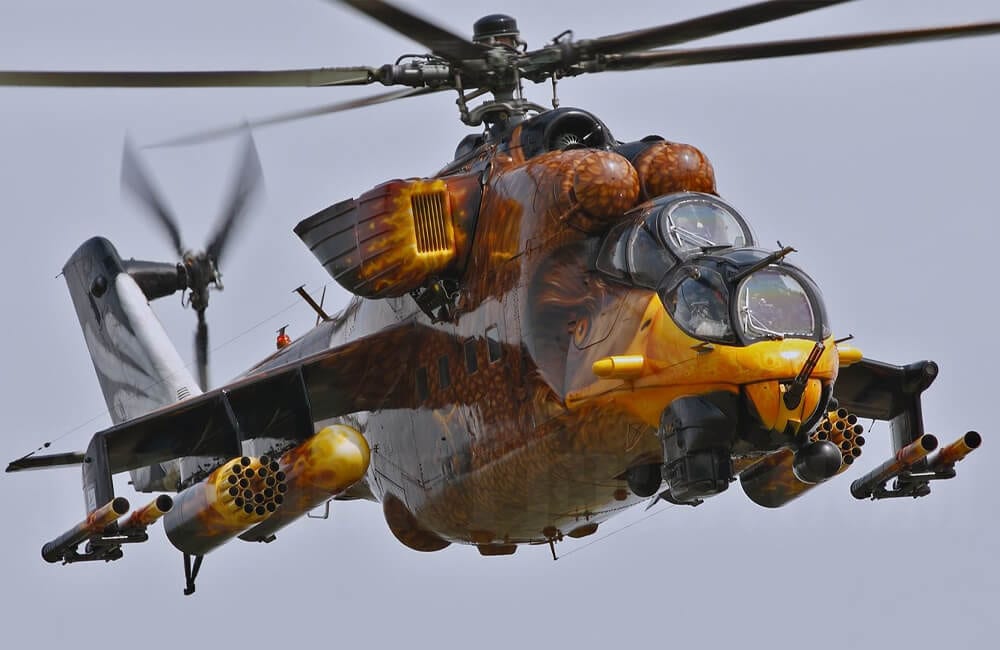 The Mi-24V is one variation flown by the Berkuti. Designed by Mil, a fierce competitor of companies like Lockheed and Textron, the Mi-24V was produced in the mid-seventies. It has 9M114 Shturm missiles, eight of which are mounted on four outer pylons. Over 1,500 of these heavily-armed crafts were made, though only a few were painted with Berkuti designs.

Bubbles Beanie Baby
Where It Was Sold: Toys R UsOriginal Est. Cost: $7.99*Current Est. Value: $129,000* Beanie Baby madness swept across North America in the ‘90s like a curler vying for a double on the final stone of the last end with Olympic gold on their mind. Fast, furious, and without mercy. Each time a new BB was […]
These Are The Used Cars Most Likely To Become Coveted Collectibles
What makes a car a collectible? The general consensus is that a car that is twenty-five years or older is eligible for “collectible status,” but age isn’t the only factor that makes a car a classic. Some vehicles are relegated to the history books without any fanfare, while others become rare, pricey must-haves that collectors […]
Amazing Things From The 80s Our Kids Are Missing Out On
Anyone who experienced the 80s can vouch that it was a weird and exciting time in America. Michael Jackson was topping the charts with countless tracks from his Thriller and Bad albums. Glam rock was in full swing, which meant hair was big, make-up was overdone, and clothing was bright beyond belief. Whether you look […]
The Weirdest, Most Wonderful and Expensive Things Found in the USA
America. The home of the free, the land of the brave, and the country with some of the strangest things found anywhere on Earth. People travel from all over the world to see the weird and wonderfully odd things America has to offer.  Whether you’re looking to indulge in a $1,000 golden sundae, visit the […]
Advertisement