Oompa Loompa doompety doo, here’s a list of sweets for you. Some are sour, and some are sweet. Others are odd but make for tasty treats. They come from nations found far and wide. Hold on tight for this flavor-filled ride.

Whether orange with licorice or marzipan with pistachio cream, there are millions of sweets, enough to fulfill one’s wildest dreams. An endless selection of weird candies are out there to find, but this list is of the international ones – we hope you don’t mind. It might seem like some of these are a sin, but each is incredibly popular in its country of origin.

Coming all the way from the “Land of Smiles” is the chewy and tangy, sweet yet sour, Tamarind candy. The candy base is made from the paste of tamarind fruit that’s been mixed with sugar. The simple concoction is laid out in a long, thin log and cut into individual servings. 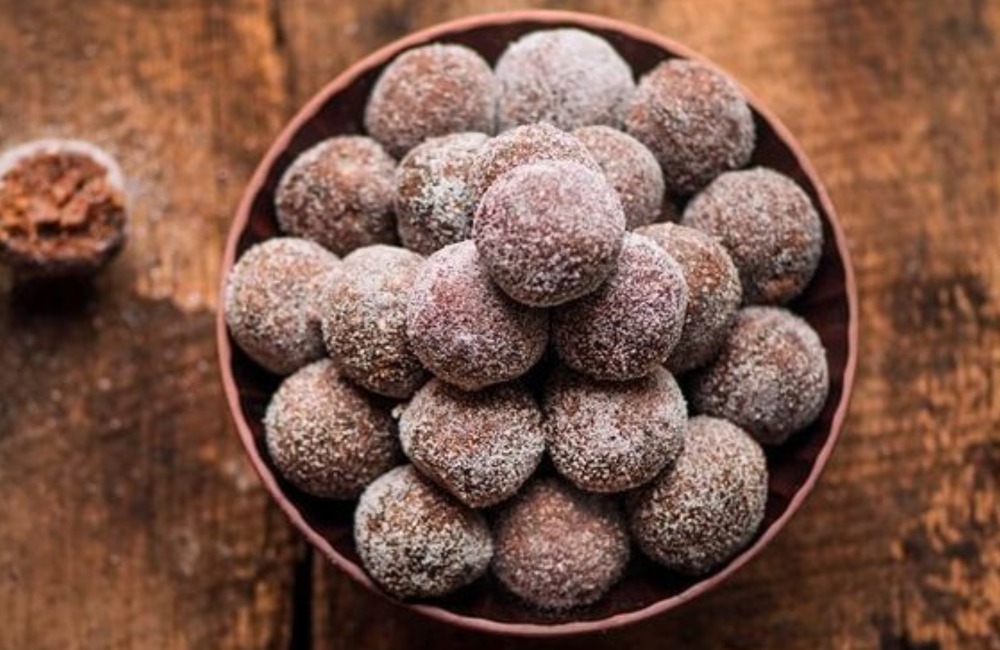 Tamarind candy is similar in look and texture to Tootsie Rolls, but that’s where the comparison ends. The Thai treat isn’t as sweet as its North American alternative. On the contrary, it has more of a fruity taste with a hint of sourness, but that doesn’t mean it’s any less delicious.

Dedos is a Tamarind-based treat from the Mexican candy manufacturer Indy that comes individually wrapped in larger packs. Each one looks like a finger, and they are eaten with your fingers (usually), which explains the name “Dedos” (“fingers” in Spanish). 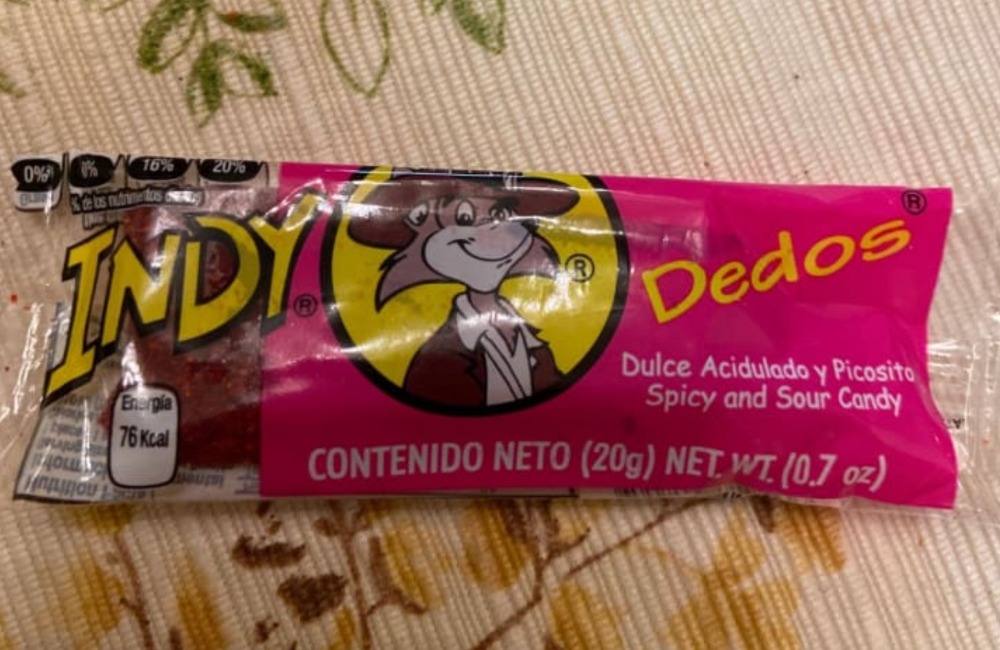 Anyone who has tried Salsagheti (another of Mexico’s popular candies) will find Dedos to be a little familiar. They’re chewy, sour, and as addictive as candy can get. Thanks to the chili powder coating on each treat, Dedos provides snackers with a bit of “hey, how ya doin’?” with every bite.

They’re sweet. They’re chewy. They’re downright delicious. White Rabbit is a small, rectangular, individually wrapped milk candy that has been enjoyed in China since 1943. On the other hand, milk candy has been in production (in one form or another) for centuries. 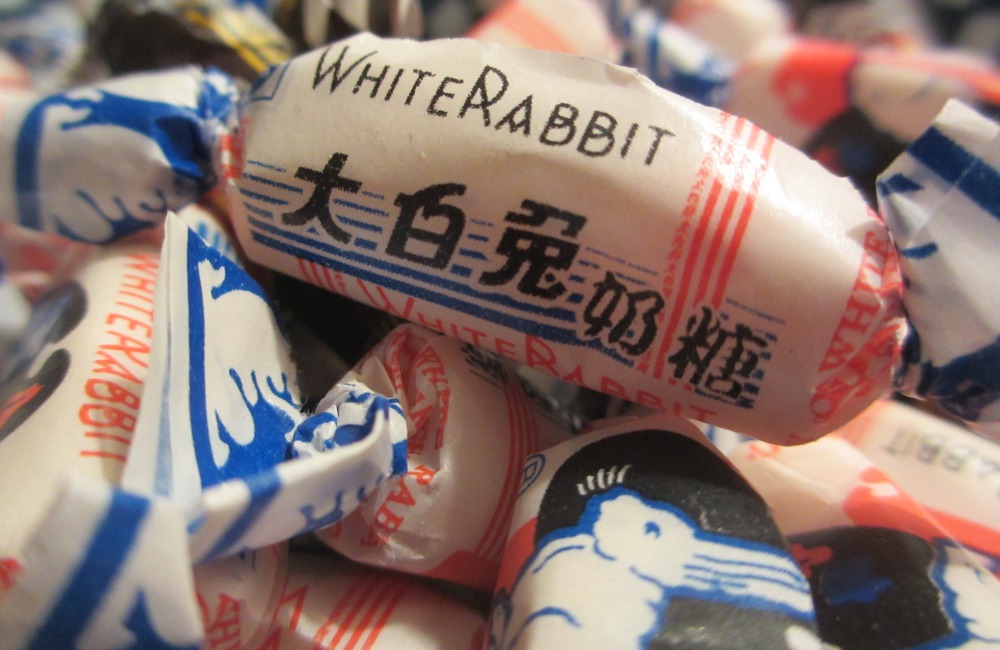 It’s made up of sugar, cow milk (formerly water-buffalo milk), condensed milk, and/or powdered milk. At least, that’s when the Shanghai Guan Sheng Yuan Foods company began manufacturing them. If you want to give them a try, a 6.3 oz pack with 20-30 pieces is only $4.19* on Amazon.

Created in ‘the other land down under by the Oamaru-based Regina Confectionary Company (RCC), these pineapple-flavored, chocolate-covered marshmallows have been a fan favorite ‘lolly’ amongst Kiwi youth since the mid-1950s. However, more than anything else, the Lumps’ creation resulted from happenstance. 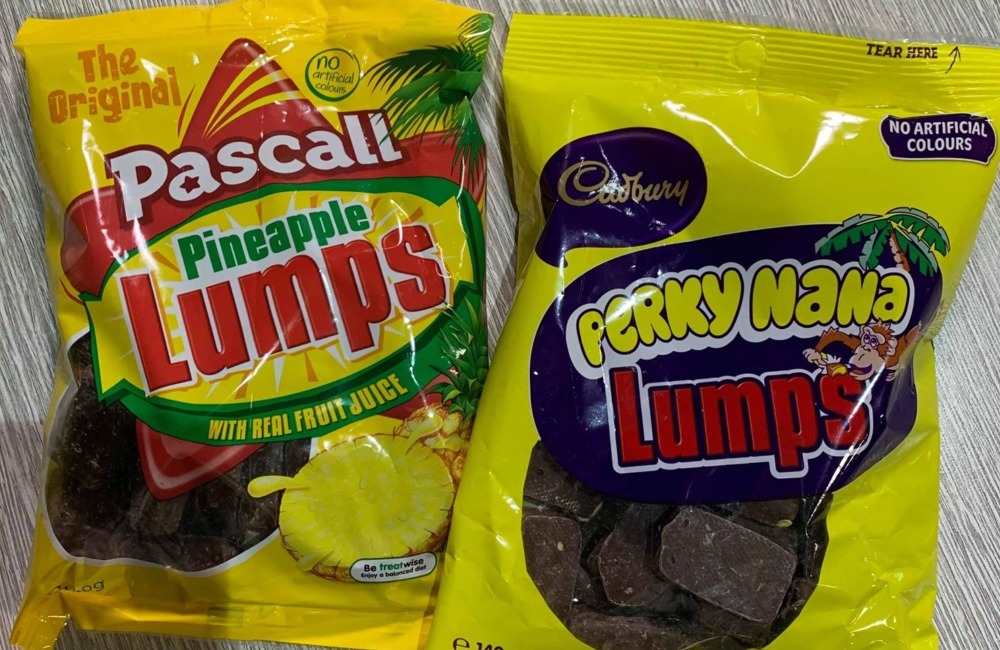 RCC’s confectionary chief, Charles Diver, formulated a plan that would see the excess parts from the company’s most wasteful product, pineapple-flavored marshmallows shaped like fish, repurposed into new candies, “Pineapple Lumps.” Variations of the “Lumps” can be found worldwide, but anyone who’s tried them knows there’s nothing quite like the OG.

With two-thirds of the total number of Kit Kat flavors originating there, Japan has unwittingly become the unofficial “Kit Kat capital of the world”. In the mid-2010s, as dozens upon dozens of new flavors were being introduced, the Japanese Kit Kat factory produced one of its most popular flavors to date — wasabi. 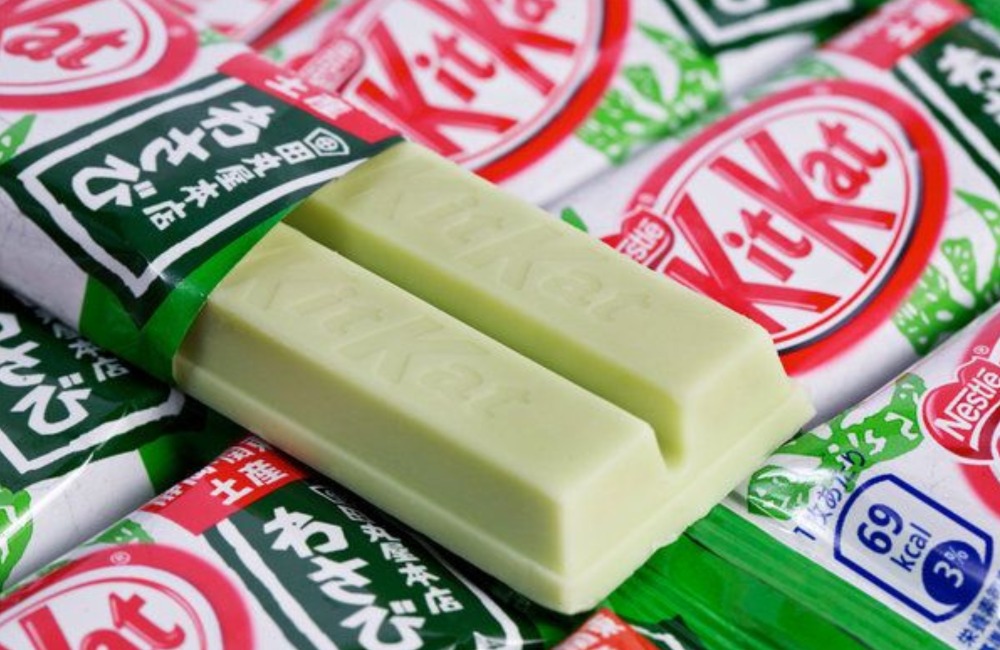 Not to be mistaken for the matcha Kit Kat, the wasabi variety is of a lighter green complexion than its tea-flavored companion. One would think a wasabi-flavored chocolate bar would be spicy. On the contrary, these bars have all the flavor of the sinus-clearing horseradish paste, but only a hint of the spice.

A lot happened in 1964. America was in a race to space that it was half a decade away from winning, the St. Louis Cardinals won the World Series, and Romania’s national chocolate bar hit the shelves for the first time. 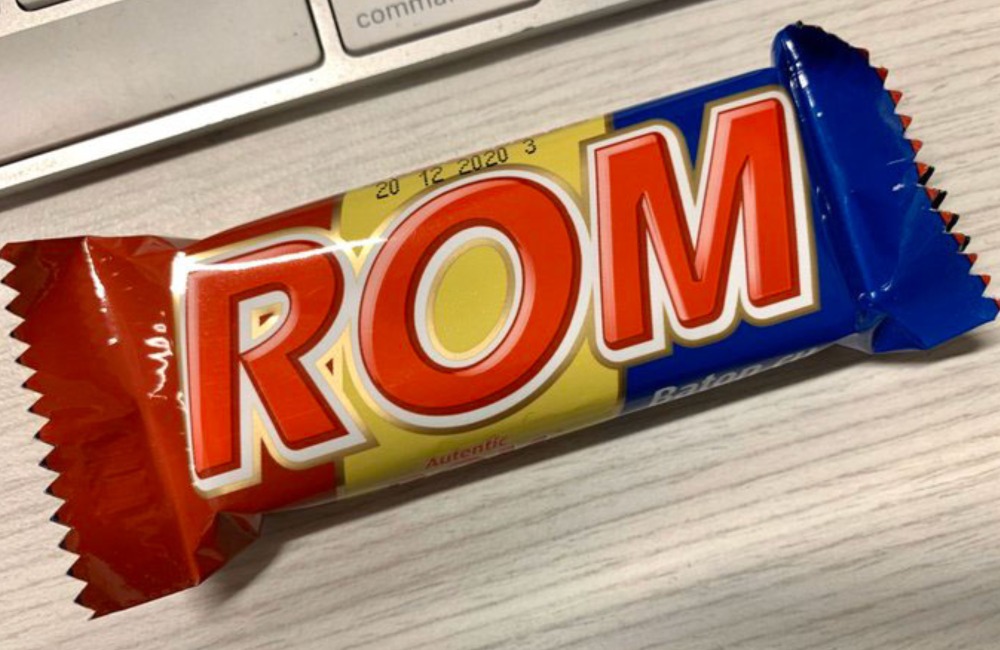 ROM is a rum-scented chocolate bar that comes in a handful of varieties, including raisin, caramel peanut, milk, and sandwich. The bar’s original wrapper was red, yellow, and blue like the Romanian flag, but an alternate American flag-backed wrapper has since made an appearance as well. This caused quite a controversy when it happened, but the bar was what mattered most when it came down to it, and everyone loved the ROM bar.

There are few flavors more refreshing than the combination of mint and chocolate on a sweltering hot day. Needless to say, there are many humid and hot days in South Africa and, therefore, there are many such occasions for refreshing treats. In the 1960s, the British confectionery company Wilson-Rowntree met the demand by releasing the Peppermint Crisp bar. Shortly after its introduction, Peppermint Crisp was sold to Nestle. 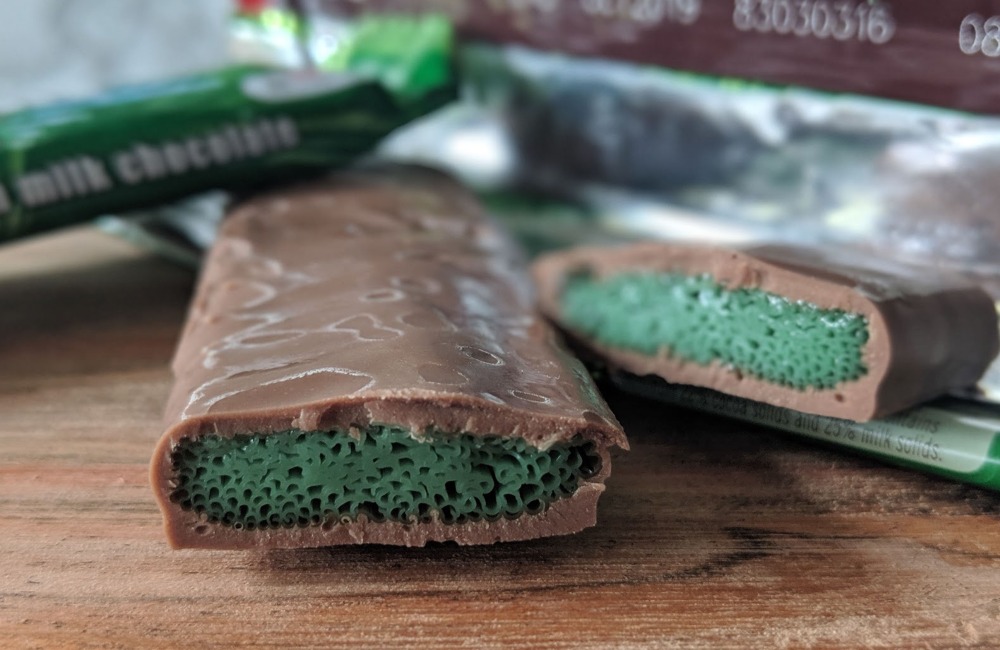 The crispy multi-layered mint interior is made of cylindrical tubes composed of a sugar concoction called ‘cracknel.’ Those tubes are then covered in a healthy coating of milk chocolate. Peppermint Crisp is one of the most popular bars in South Africa and has recently begun to gain momentum in New Zealand as well.

Tayto crisps have been one of the top-selling snack foods in Ireland for decades. It only makes sense that Tayto would release a limited edition chocolate bar flavored after its most popular flavor, even if that flavor is cheese & onion. 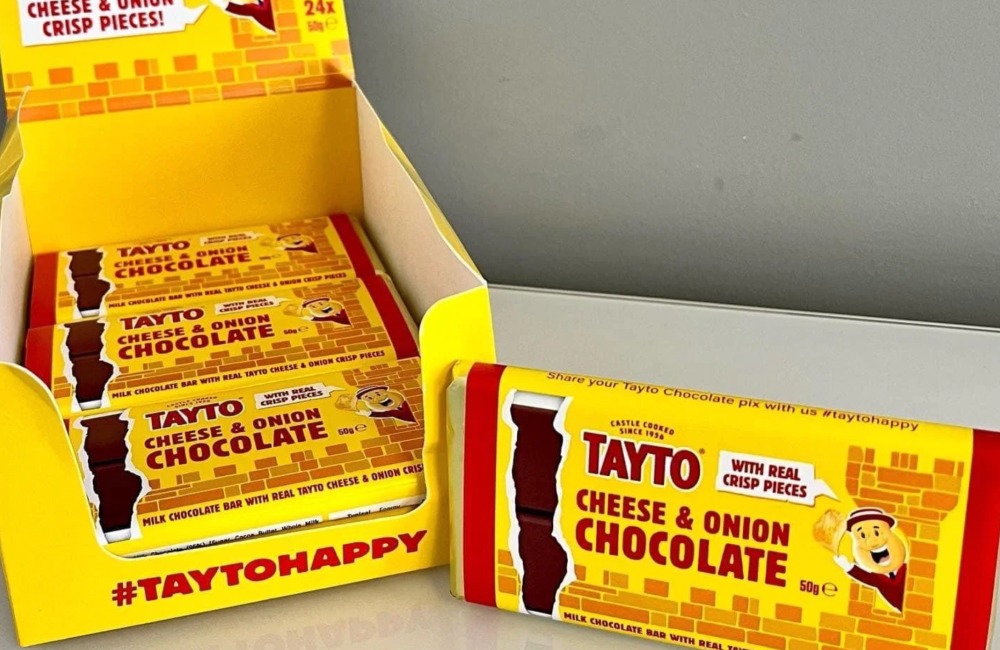 In early 2022, Tayto released a limited edition chocolate bar with pieces of cheese & onion Tayto crisps inside. The catch is they are only available online and in Northern Ireland. If you manage to get your hands on a bar and find it to your liking, be sure to stock up because Tayto has announced that there will be no more produced when they sell out. If you over-buy, you can always sell the extras on eBay.

To enjoy Turkish pepper, or as it’s known in Finland, Tyrkisk peper, takes an acquired taste. The treat is beloved in some Finnish households and outlawed in others for no other reason than their unexpected and sometimes misunderstood combination of flavors: salt and licorice. 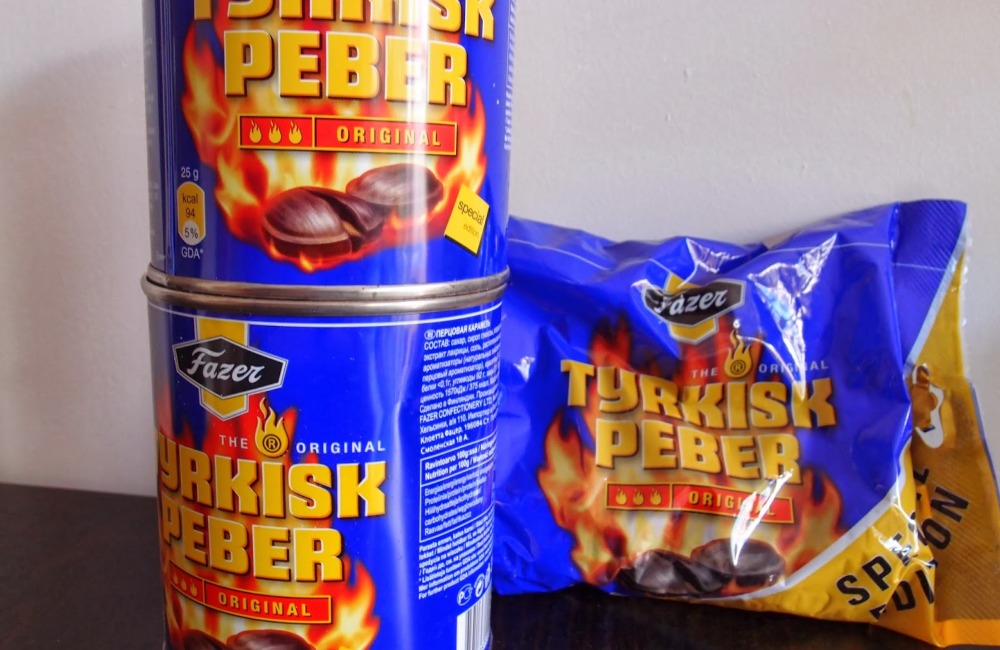 Salmiakki is a candy that blends the flavor of salt and anise together in hard, soft, and chewy bite-sized snacks. If you’re a fan of the black licorice Maynards Wine Gums but always thought they were missing a salty finish, give Salmiakki Turkish pepper a try.

A trip to the local convenience store can be a stressful and overwhelming experience for a child, especially if it’s their first time there. There are a seemingly endless number of options, but only enough money for one snack. Do they choose something chocolaty? Or do they go with the candy that goes off like fireworks in their mouth? 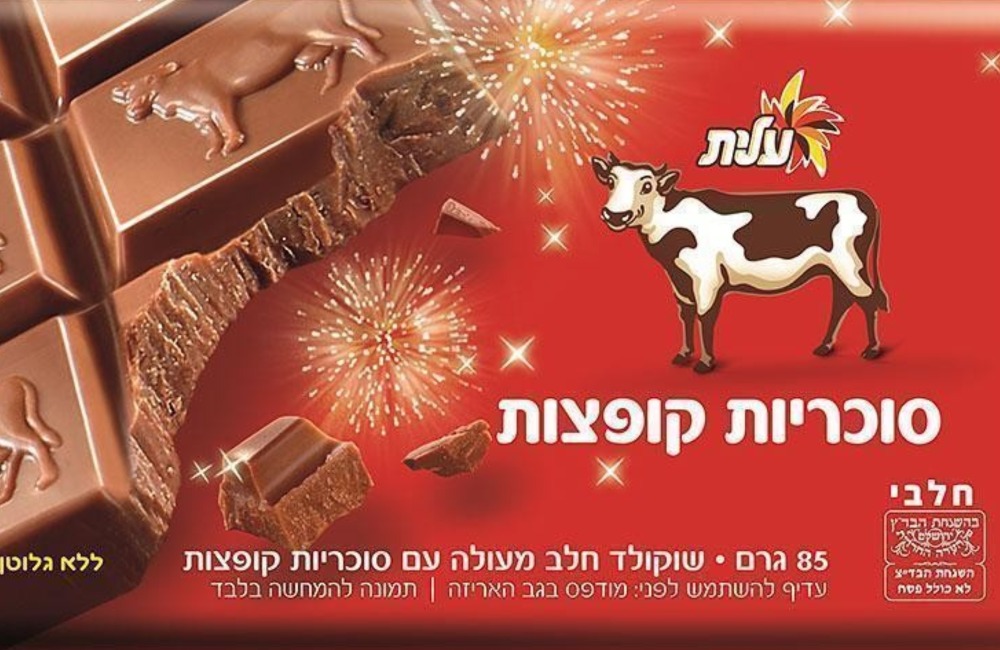 Why not both? Israel’s “Elite” chocolate brand has “put those hands together” and combined chocolate with popping candy to help simplify the snack choosing decision. Looking to keep the party going right through snack time? Try one of Elite’s Milk Chocolate Popping Bars.

Durian fruit has gained worldwide notoriety for having a horrid aroma but a delightful roller-coaster of a taste. Understandably, someone decided that it would be best to create a candy that had the taste and not the smell of the fruit. 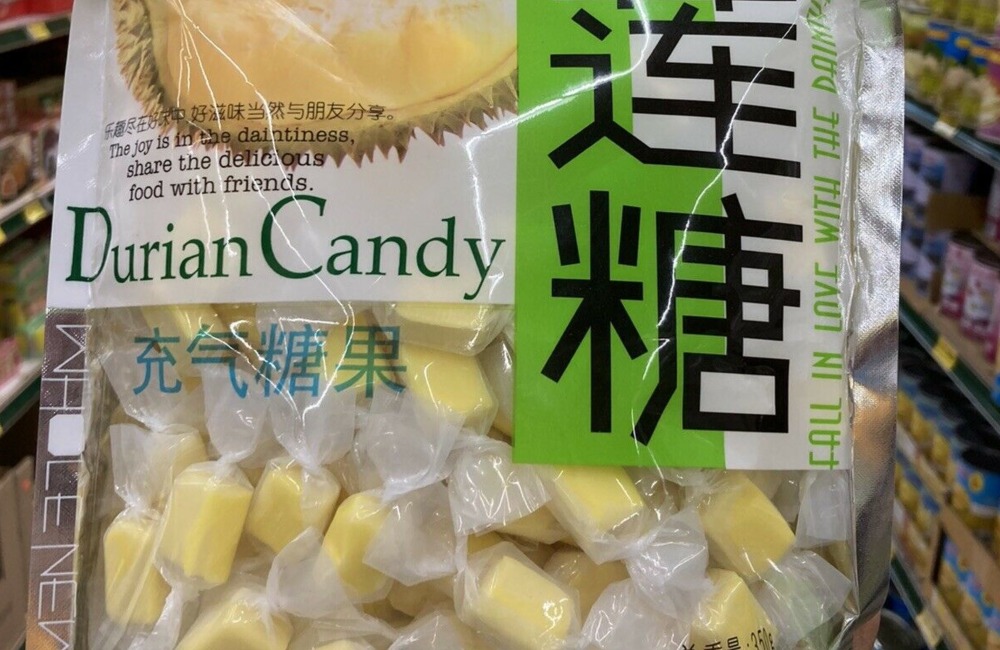 Originally from Ben Tre in the south of Vietnam, people everywhere can now enjoy the combination of sweet, savory, and unknown flavors of durian candy. Whether you’re visiting Ho Chi Minh City, Hanoi, or Sapa, this taffy-textured treat can now be found at shops across Vietnam and many other countries in the world as well.

Tiger Tail ice cream is one of Canada’s hidden snack food gems like all-dressed and ketchup chips. For those who don’t know what it is, Tiger Tail is orange-flavored ice cream with a thick swirl of black licorice through the center that was named for its apparent tiger-like pattern. 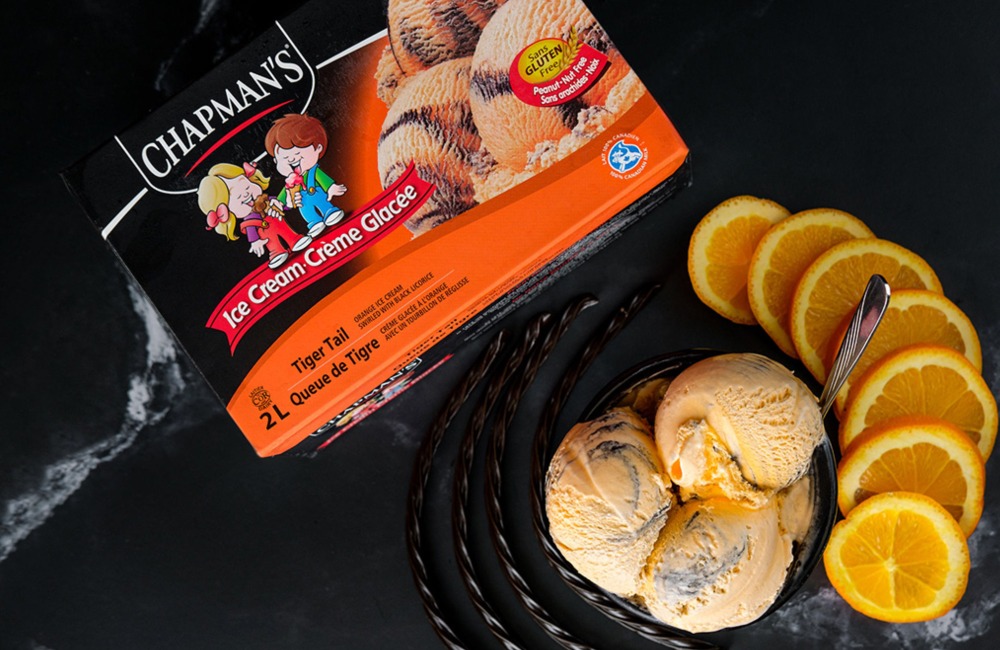 The aptly-named Tiger Tail ice cream was most popular in cities across southern Ontario throughout the 50s, 60s, and 70s, but had some fans elsewhere north of the border as well. The frozen treat’s popularity began to wane by the end of the 80s. However, recently it has made a comeback (for nostalgic reasons) and can be found in the frozen food section of Canadian grocery stores and select Baskin-Robbins locations.

If there were ever any doubts about whether someone should fuse the fine cuisines of Italy and Mexico, Salsagheti is proof it works. Salsagheti provides a tastebud experience, unlike any candy you’ve had before. The candy strings come in various flavors, including watermelon, mango, tamarind, and green apple.

Don’t be fooled. These strings are not like the sour ropes that candy-lovers are used to. To get to the fruit-flavored rat tail gummy beneath the surface of Salsagheti, one must first get through the mouth-watering inducing taste of the spicy sprinkles and sour powder that coats each string.

In 1975, when the Japanese snack food company Meija Seika tried to find an exciting shape for its latest line of cookies, the top brass settled on mushrooms. That might seem like an odd decision to some, but over the following 4+ decades, Kinoko no Yama became one of the top-selling snacks in Japan. 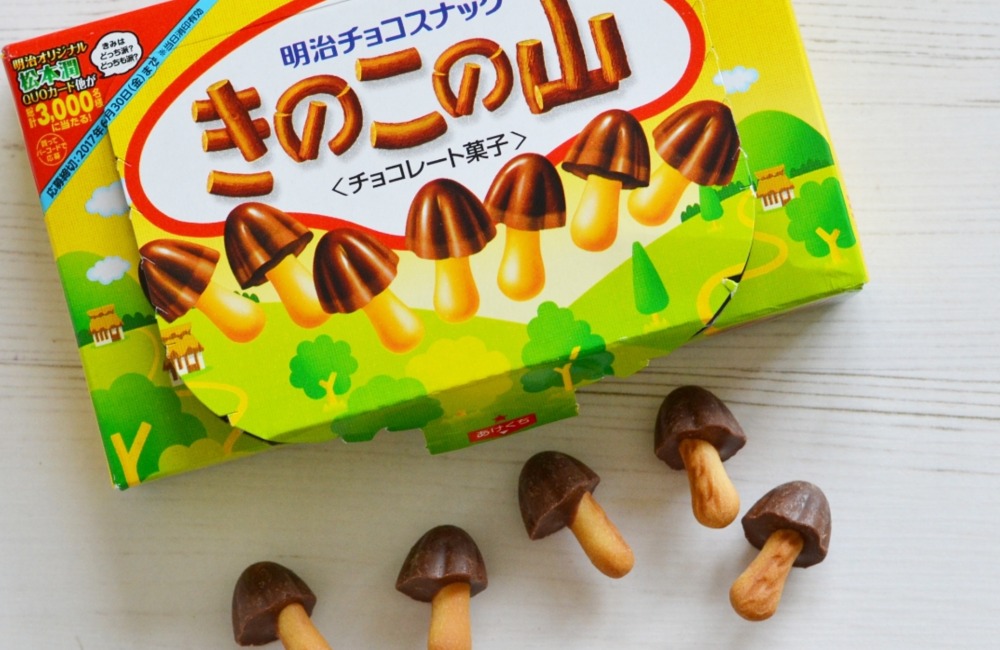 The mushrooms’ chocolate ‘caps’ are fixed above a cookie ‘stem’ that combine to provide snackers with a crunchy sweet bite every time. If you’re looking for a fungi to have a snack with, Kinoko no Yama can now be found in the States under the name ‘Chocorooms’ at a wide range of stores, including Target and Walmart.

49 Bizarre & Valuable Discoveries Found In Unexpected Places
We’ve all made some unexpected discoveries before. Maybe you found $20 in a coat pocket you didn’t use, or you stumbled upon a surprise family heirloom in your basement while cleaning. Just like your findings, the discoveries on this list all came by surprise. They range from weird to invaluable, encompassing everything in-between. Many of […]
70+ Essential Survival Projects You Should Build ASAP
There are a lot of reasons why someone would want to attempt the projects on this list. All of the how-tos here have to do with survival, whether they involve building shelter, growing food, camouflaging rain barrels, or another vital skill. In a survival situation, these DIYs will definitely come in handy. No matter whether […]
40 Things That Every House Had In The ’70s That No One Sees Today
The 1970s were a colorful time in American history, both figuratively and literally. If you grew up in this era, then you remember that the ‘70s were famous for the rise of disco and bell bottoms. You also know that this era was full of cultural change, technological innovation, and, as with any time in […]
The Strangest Places in the World to Visit
It’s no secret that tourism boosts the economy of many countries around the world. Idyllic sights like the Niagra Falls or Paris’ Eiffel Tower are well-known and certainly well-visited, but what about the path less traveled? The globe boasts over 510.1 million square kilometers of untold beauty, ancient sites, and natural wonders.  Next time you […]
Advertisement