Japan has established a reputation for being the most prominent country in the world for technological innovation. From smart devices to unusual vending machines, Japanese companies are always looking for ways to stay ahead of the game. When it comes to the automotive industry, it’s no different.

Huge car manufacturers like Toyota have been working tirelessly over the years, producing some very interesting vehicles. Some concept cars from decades ago even predict the future with astonishing accuracy – while other custom whips are so mind-blowing it’s almost impossible. One thing is for sure – Japan’s highways are never dull.

As every avid car fan knows, it’s not just big companies that make the best whips. In fact, owners love to customize their cars in all sorts of wild and interesting ways. In 2015, American enthusiast Steve Feldman took a trip to Japan to take a look at the incredible custom car scene.

One particular group specializes in tweaking their Lamborghinis, decking them out with neon body paint and lighting. Some people might see this as sacrilege considering that most of these models cost upwards of $200,000, but others find it incredibly interesting. The sheer amount of attention these vehicles get on sites like YouTube proves that.

Given how immensely customized this van is, it’s impossible to tell what once lay underneath it. In many ways, that’s the genius behind Japan’s thriving custom car scene. Normal models are taken and transformed to the nth degree, making them unrecognizable. 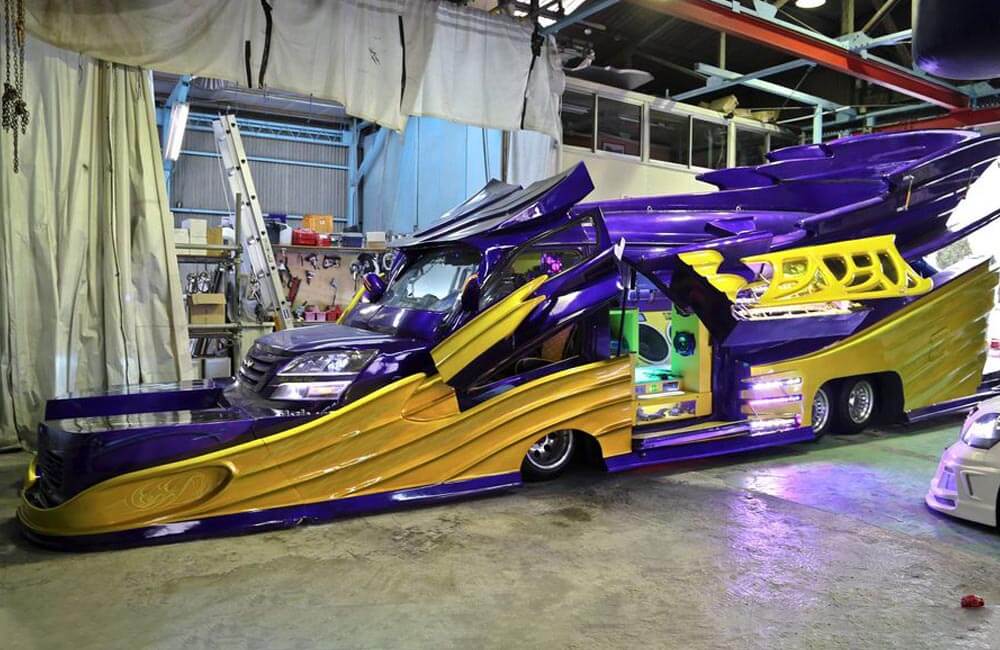 In this case, the inspiration for the design was taken from Batman, combining the purple and yellow trademark colors of the Joker to create something out of this world. It’s difficult to fathom that this car is even driveable, but it is. It certainly wouldn’t look out of place in a AT&T Batman feature.

When most of us think of the ‘80s, we think of style decisions that should never have seen the light of day. However, Nissan was busy creating a new concept car in 1989 that looks like it should’ve been born in 2017. The Nissan Boga debuted at the Tokyo Auto Show, much to the delight of attendees. 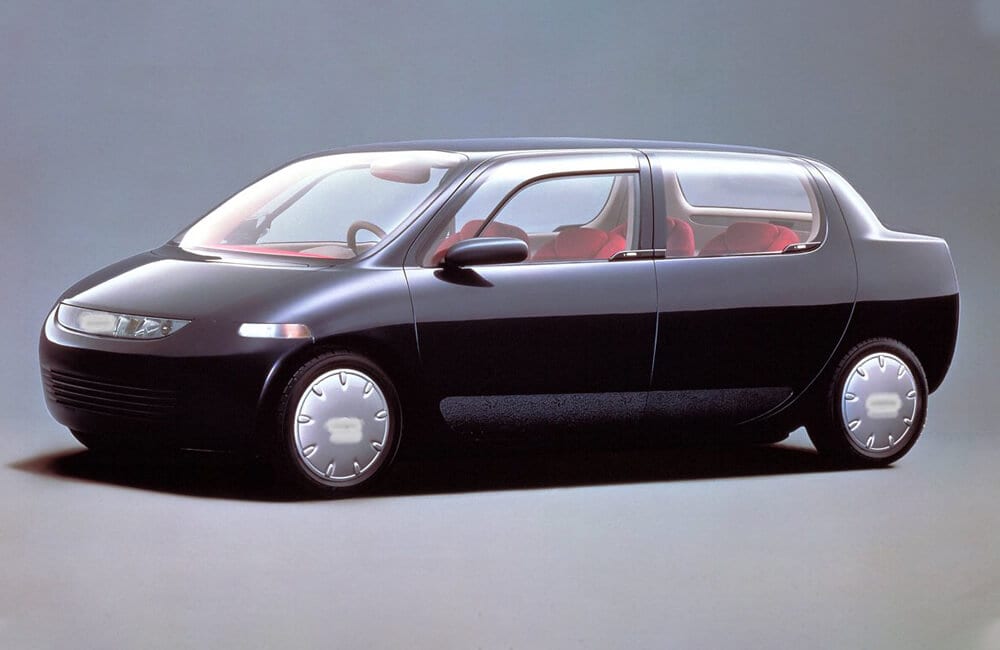 In many ways, the Boga was way ahead of its time. Not only was the silhouette purposely designed to give passengers extra space, but the car even came with fingerprint sensors to allow easy access. Sensors like this are prevalent now, but 30 years ago this was a mind-altering feature. Sadly, the Boga never went into mass production.

When the Dome Zero first went into prototype production in the late ‘70s, many were hopeful it would enter the market and become a huge sensation. After all, it’s boxy, low-level design was very on point for the ‘80s. In fact, you could almost imagine Marty McFly hopping behind the wheel. 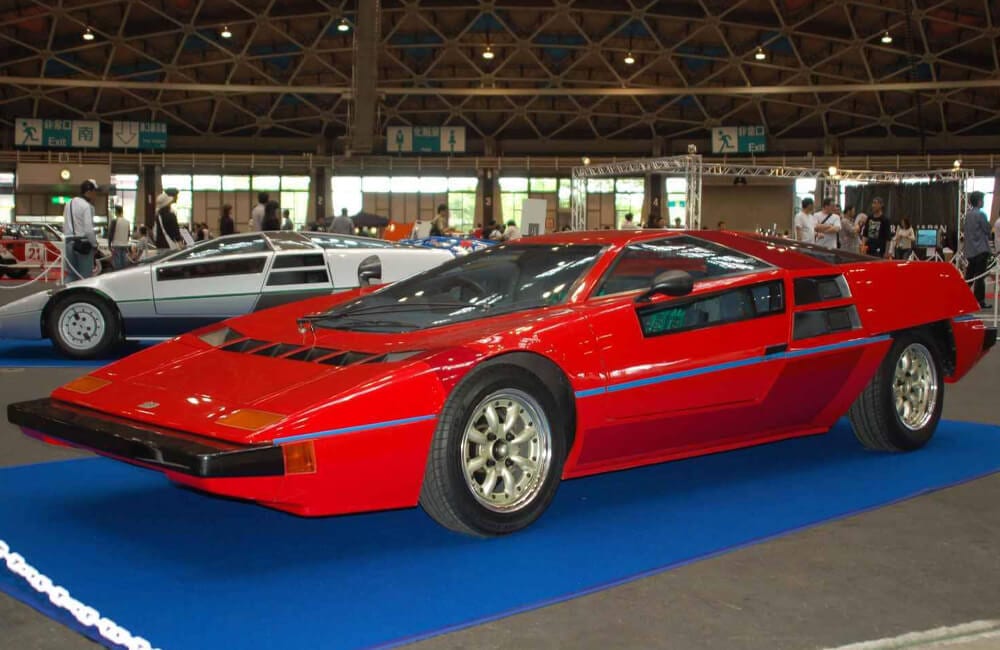 Sadly for fans, the vehicle simply faded into obscurity. Some say that it was down to the car not meeting Japan’s safety standards, while others claim Dome Zero’s fate was all down to the finances. In the late ‘70s, Dome was a small company and lacked the capital other titans like General Motors had to bring a project like this to fruition.

Honda’s Fuya-Jo concept car wowed audiences when it was presented at Toyota’s auto show in 1999. The strangely-shaped box vehicle looks more like a speaker on wheels than something you would commute to work in, but that was the whole point. Each seat was designed to look and operate like a bar stool, while huge speakers were incorporated into the door panels to give the vibe of a portable club. As a concept car, Honda’s Fuya-Jo never went into mass production, but it’s still fun to look at over two decades later.

Blue and yellow always makes for a striking aesthetic, especially when it’s painted on a car with extreme precision. This sports car has been given the royal treatment and is clearly treated incredibly well by its owner. 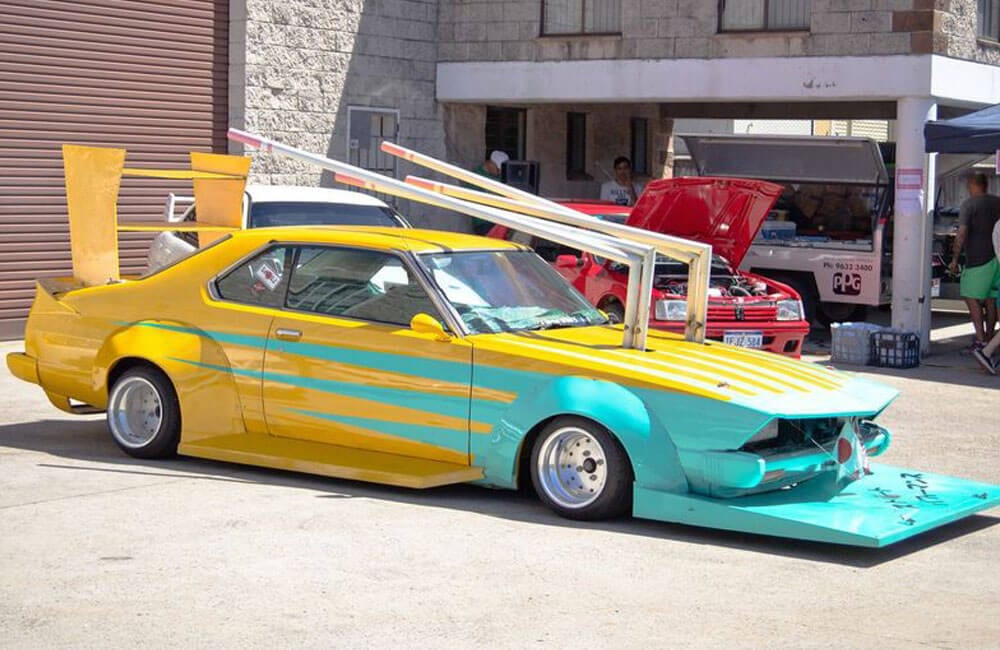 The large pipes sticking out of the hood may not be to everyone’s taste, but that doesn’t mean it’s any less desirable to a niche market. Strip off the custom paint and spoilers, and you might find a very nice, classic vintage car. Just don’t expect that to happen any time soon – this whip is in it for the long haul.

For lovers of Japanese cars, it just doesn’t get much better than The Mitsuoka Orochi. The gorgeous curves of the body were purposely designed to catch attention. Even though the vehicle started out as a concept car in 2001, Mitsuoka Motors soon realized it didn’t want to waste the opportunity and introduced it into production. 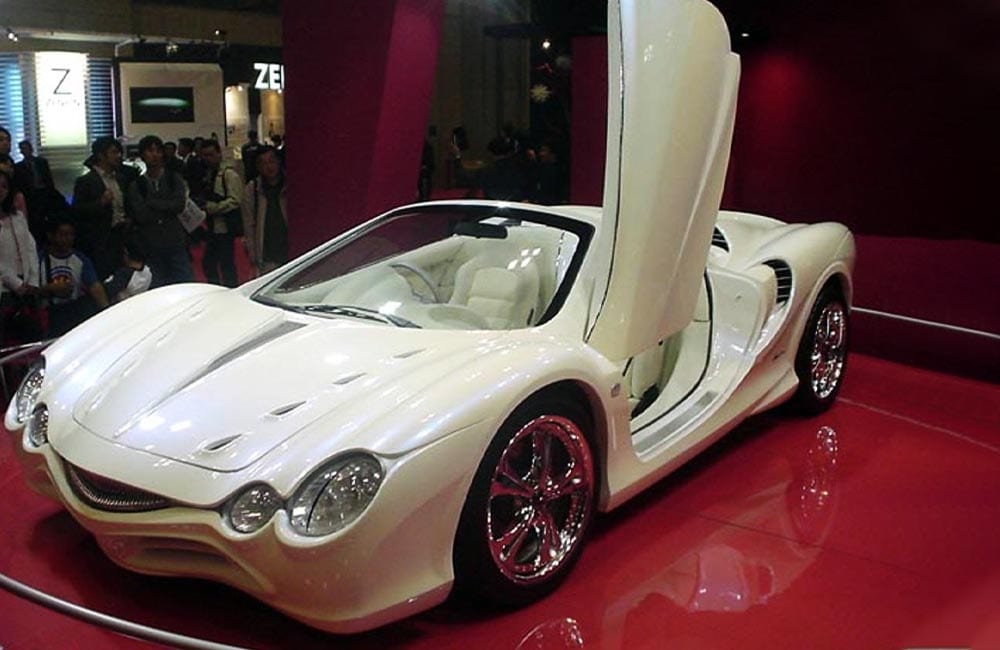 Several different versions of the car have been made since 2006, although each has been limited in quantity. Coming in at around $150,000 per unit, Orochi’s aren’t exactly the cheapest run around on the market.

With a name like Autozam, you might think that this sports car would pack a little bit more of a punch. While the AZ-1 by Suzuki never really made it to the big leagues, it’s still notable for a variety of reasons. Made from 1992 to 1995, the coupe came in Siberia Blue and Classic Red, catering to both sides of the market. Even though it was an affordable mid-range vehicle, the Toyota-owned AZ-1 had poor sales, failing to meet its modest 800-a-month target. However, the success of this project was largely down Japan’s faltering economy at the time.

Hello Kitty has a long history, first popping up onto the scene in 1974. The small cartoon cat has managed to maintain a huge fan base as the decades have ticked by. Some supporters love the character so much that they’ve even dedicated their cars to it. This particular motor looks more like a moving shrine than a vehicle. 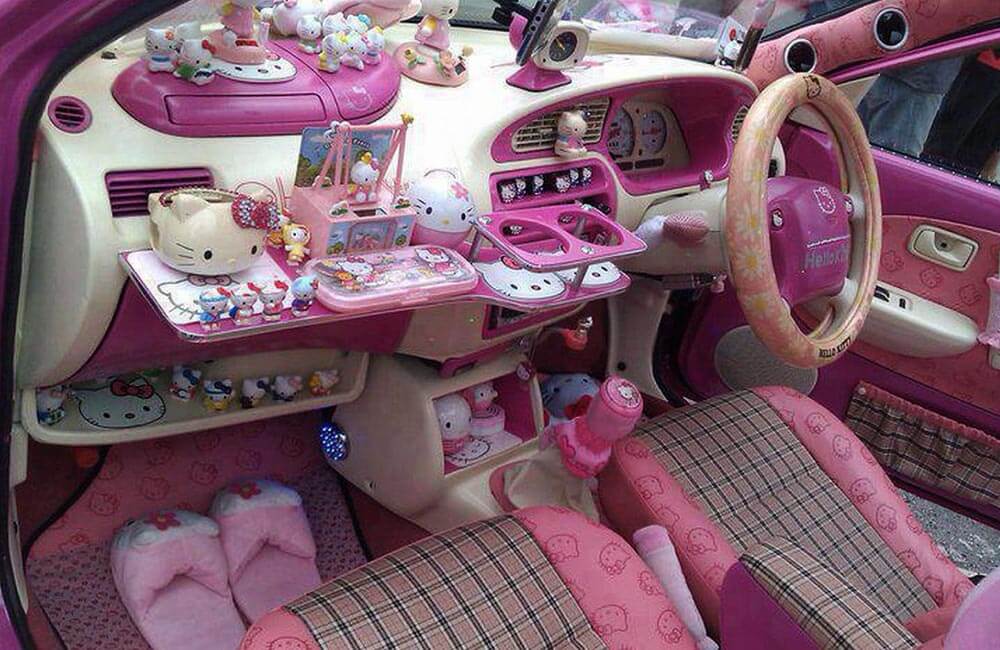 You can buy Hello Kitty merch on tons of websites, including Amazon, but it looks like this car owner has even reupholstered the seats to match. While we’re not sure exactly what model this particular cruiser is, Mitsubishi released a special edition Hello Kitty car in 2014 for $13,400 per unit.

Some cars stumble onto the scene and leave jaws agape thanks to their sleek appeal and high specs, while others come and leave a decidedly smaller, yet still palpable, impression. The Daihatsu Midget first hit the market back in the ‘50s, sticking around until production ended in the ‘70s. 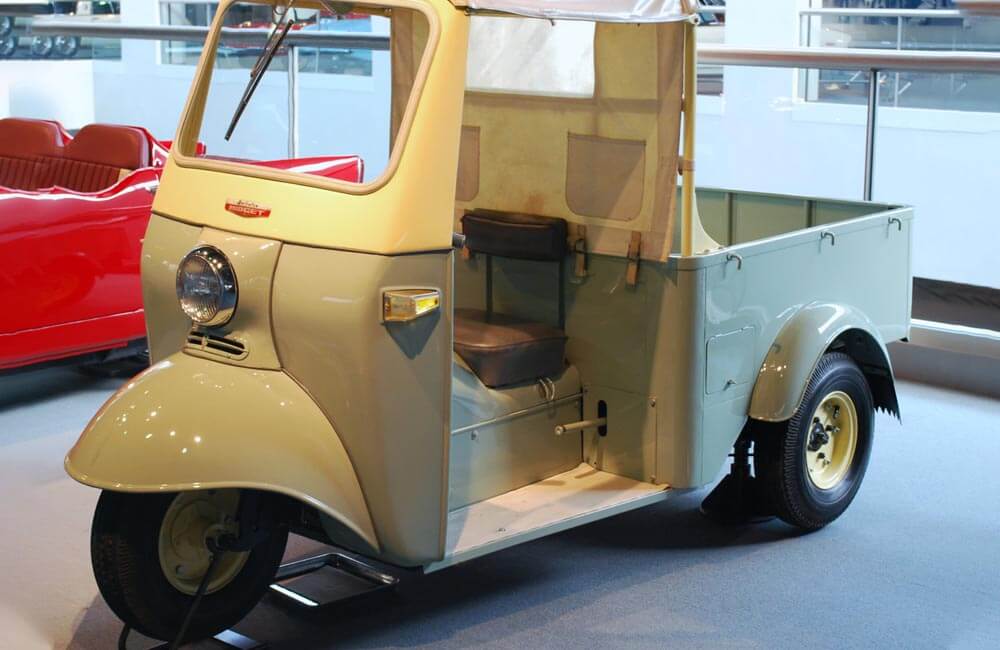 Thankfully for fans of the low-cost three-wheeler, mark II was released in 1996. This time, the Midget was still tiny, but had four wheels and was more van-shaped. For a small car the design proved popular, especially in the densely populated urban areas where parking is often difficult.

Deciding what color to paint your van can be a laborious process, but there’s one shade that never goes out of style: pink. The owner of this tricked-out transporter clearly got the memo, but they didn’t stop at a little pop of fuschia. 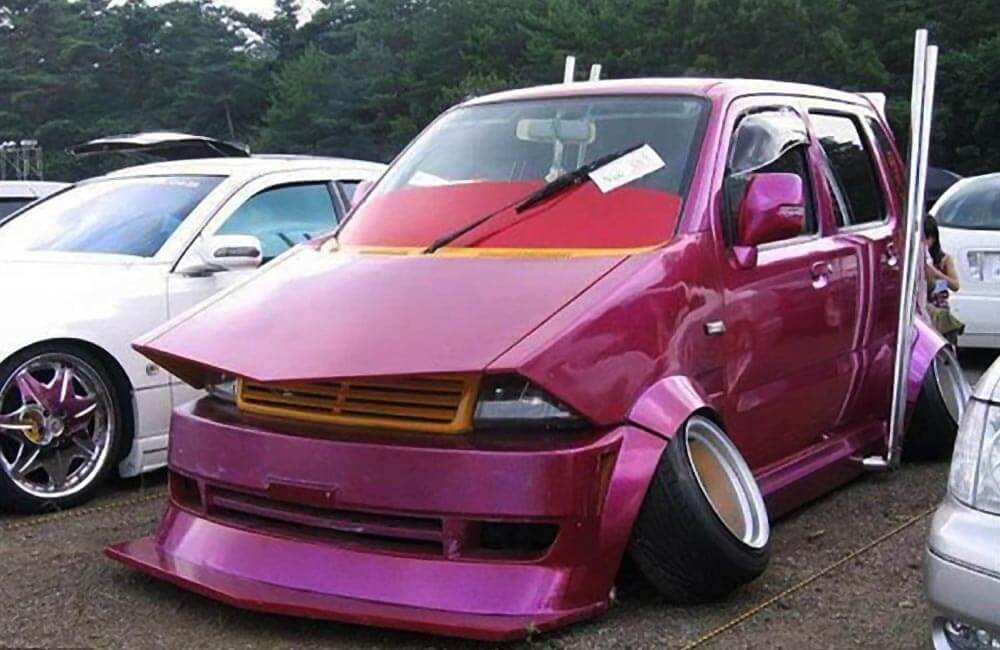 The oddly-shaped pointed bonnet, the modified wheels, and the pipes all create a truly eye-catching spectacle that won’t be missed at any car meet. Wallflowers wouldn’t want to get behind the wheel of this, but a Jetson might. Don’t be surprised if you see a flying alien tailing just behind.

Lamborghini’s come in many shapes and sizes. Some are plain black, some are bright pink – some are covered head to toe in leopard print. Considering the model of this car and the extensive customizations, the owner likely spent upwards of $200,000 on it. 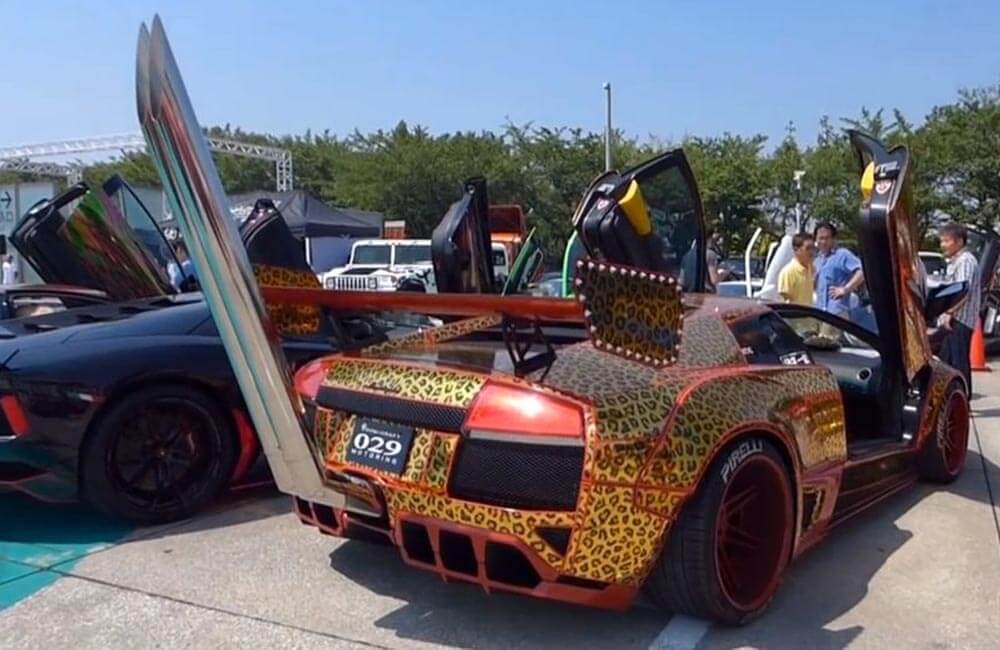 Leopard print comes in and out of fashion, so it’s a risky choice of decal. One thing is for certain – there’s nothing safe or shy about this car. Why go for plain black when you can turn up to the school run in this bad boy and make a lasting impression?

Have you ever been stuck in traffic and wished you knew just how far the tailback went on for? This handy custom car could handle that problem in just the push of a button. Not for the faint of heart or for those scared of heights, this station wagon could put you head and shoulders above the rest. 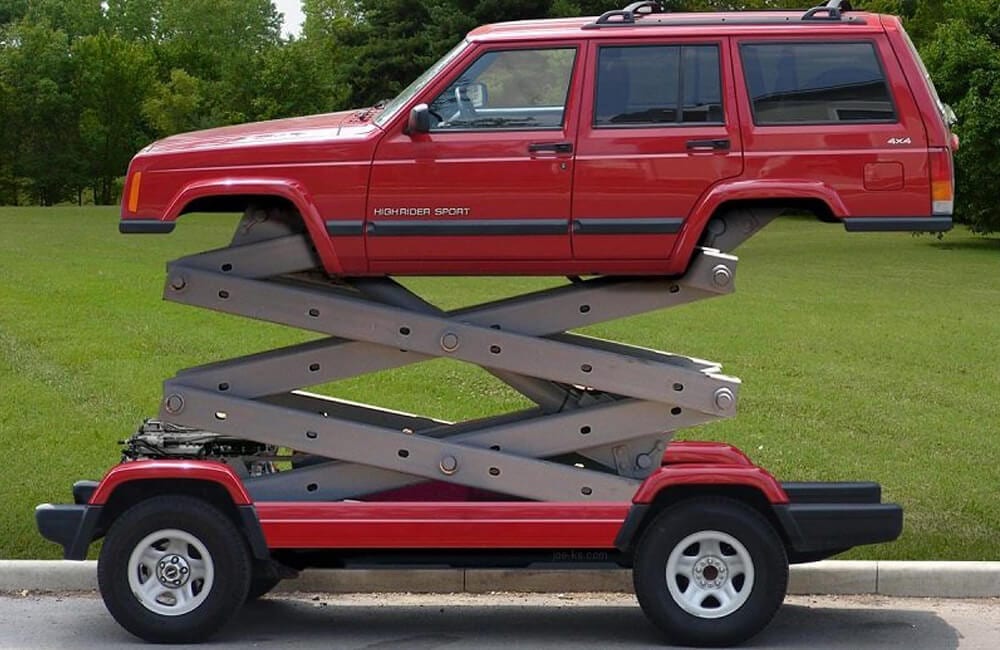 One happy owner has clearly put a lot of effort into this customization, so don’t expect to find it on eBay any time soon. It might be a while before this craze catches on, but realistically, there could be a market for a vehicle like this – even if it hasn’t been found yet.

Japanese start-up SkyDrive has managed to pair up with one of the world’s leading car manufacturers to bring the future of driving even closer. After receiving a huge cash injection from Toyota of $37 million, SkyDrive was able to produce a prototype for its very first single-seat flying car. 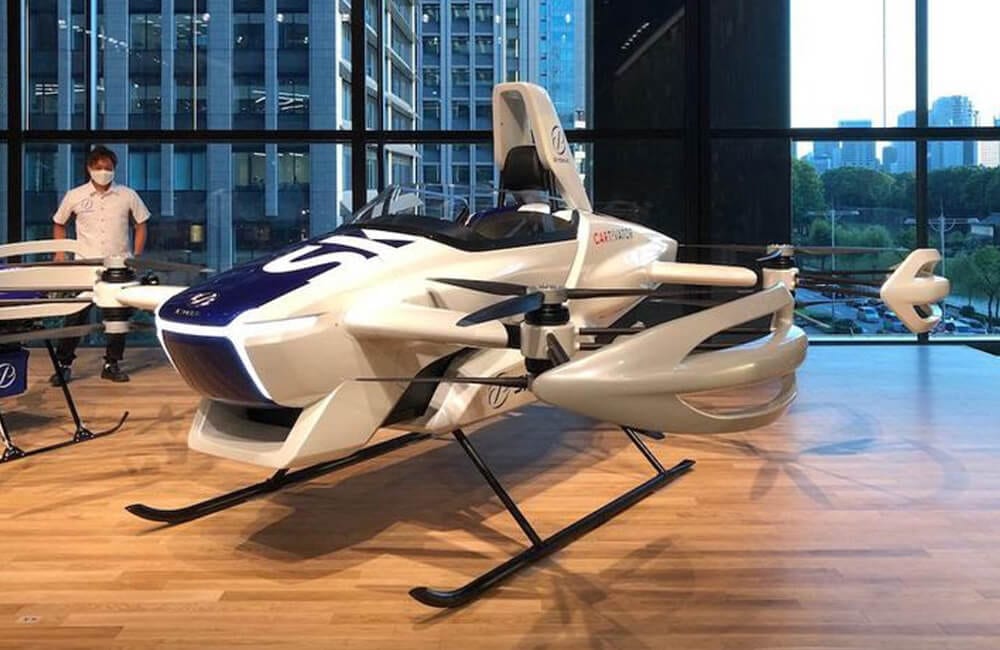 While it may not be quite the same as loading up the Ford and going on a family road trip, there are many avid motorists who would love to take a ride in this craft. The flying car hasn’t gone into mass production yet, but if tests continue to be promising it could hit the market as soon as 2023.

Amazing Things From The 80s Our Kids Are Missing Out On
Anyone who experienced the 80s can vouch that it was a weird and exciting time in America. Michael Jackson was topping the charts with countless tracks from his Thriller and Bad albums. Glam rock was in full swing, which meant hair was big, make-up was overdone, and clothing was bright beyond belief. Whether you look […]
The Weirdest, Most Wonderful and Expensive Things Found in the USA
America. The home of the free, the land of the brave, and the country with some of the strangest things found anywhere on Earth. People travel from all over the world to see the weird and wonderfully odd things America has to offer.  Whether you’re looking to indulge in a $1,000 golden sundae, visit the […]
The Most Expensive Abandoned Structures In The World
Grandiose projects can cost an incredible amount of money, but bringing ideas that are true feats of engineering to life is never a cheap business. While the amount of money poured into a palace, a luxury resort, or a stately home can be quantitatively measured, the longevity of the structure is almost entirely unpredictable.  A […]
The Most Valuable Under Water Discoveries Ever Found
The ocean is a vast space that covers most of the globe. Long before airplanes were flying around the world, ships were the only way to travel. For many, taking a job on a vessel was like playing Russian Roulette – but it could be incredibly lucrative.  Not every schooner made it home, sinking to […]
Advertisement