Scientists have long since been looking for ways to improve our world, whether it be in the trillion-dollar big pharma market or in the sportswear industry, helping brands like Nike create more advanced products. While some ideas are totally spun from imagination, a surprising amount of life-changing modern inventions are inspired by the natural world around us.

From house paint based on the texture of lotus leaves to bionic arms stolen straight from the undersea octopus, the fascinating world of biotech and biomimicry continues to grow. So not only is nature improving the quality of life for us humans, but it’s also generating a profit for innovative tech entrepreneurs as well!

Elephants may not be able to use their hands and feet, but thankfully they have an incredible bendable trunk that can do it all – from passing food to each other, to cleaning their babies. Festo Corporate decided to take inspiration from the majestic animal to manufacture a bionic handling assistant. The entire design allows for safe interaction between the machine and the robot, allowing for a much less pressurized work space. Unlike an elephant’s trunk, the assistant has a little hand at the bottom that allows it to grip specific items like a can of or an apple.

Caterpillars are undoubtedly one of nature’s most tiny marvels, with multiple legs and long bodies. City University of Hong Kong researchers decided there was something to be had with nature’s design, going on to invent a robot caterpillar lifter that is incredibly strong. The creepy crawling piece of biotech is exceptionally strong and able to carry the human equivalent of a 26-seat minibus. The main purpose of the invention is to deliver drugs into the body by swallowing it. This could help big pharma companies like Biohaven to assist patients without the need for surgery.

Solar cells are a great source of renewable energy, but scientists at KIT and Caltech could’ve just made them even better. After looking at the wings of a rose butterfly, they realized that they could copy the structure to create thinner solar cells that last much longer. The experiment resulted in a much more efficient product that is easier to make. Interestingly, scientists and professors have pointed out that even with all our energy advancements, the conversion-rates of an average butterly wing still outperforms almost anything humans have ever engineered.

The sportswear industry is always looking for ways to better protect athletes, which may be why auxetic materials are on the rise. Scientists at Sheffield Hallam University discovered that mussel shells could be the key to helping athletes on team Nike and beyond stay safe. Andy Alderson was at the helm of leading the research into auxetic materials and sports protection. Alderson and his team soon discovered there was a lot to be learned from mussels. Auxetic material gets bigger instead of thinner on impact, meaning they absorb shock in a way that’s far more helpful than traditional materials.

Bullet Trains have been standard in Japan for decades, and while they’ve mostly been quick since the beginning, they haven’t always been quite so silent. In fact, when they used to travel through tunnels they would make a loud booming noise. Engineers struggled to fix it – until they looked at a kingfisher. They realized that if they changed the shape of the train to look like a kingfisher with a pointed face, the sound would stop. Not only does the new shape cause much less of a disturbance than the original version, but it also saves around 10-15% of energy.

You can buy just about anything on Amazon these days, including handy suction cups which can be useful as hooks. Suction cups have been around for quite some time, and they’re relatively cheap to make. Of course, they’re directly inspired by everyone’s favorite eight-limbed creature: the octopus. Octopus tentacles are covered in suckers that help them navigate life under water. They use them to feel, to climb, and to capture their dinner. The suckers can also crush the shells of their prey, making it much easier to eat. They’re so supremely powerful it was only a matter of time before suckers became suction cups and hit the market.

Inspired by: The Armadillo
Sold/Produced by: Cyclus
Company Value: $1 million*

You might not be able to pick up this backpack in stores like Target, but that’s what makes it so appealing. Shoppers may have to search a little, but Cyclus’ Armadillo-inspired backpack is a work of genius that blows other bog-standard backpacks out of the water. Made from recycled tyres, the innovative design is so interesting to look at that it was even featured in the Hollywood blockbuster X:Men: Days of Future Past. It’s hard-wearing, practical, and just as sturdy and indestructible as an actual armadillo shell.

Octopus tentacles didn’t just inspire suction cups. They also inspired life-changing prosthetic arms. Kaylene Kau came up with the concept that was different from the usual artificial limb. Instead, she came up with a product that was flexible, retractable, and incredibly versatile as part of a project assignment given to her by a professor. While the design is certainly worthy, it doesn’t look like it’s available to buy yet – though interested parties can look at the in-depth details on Adobe’s Coroflot.com. For anyone looking for something entirely out of the box, it doesn’t get much better than this.

No one wants to see a bird crash into a window. Not only does it spell disaster for the bird, but it can be costly to replace. Walker Glass Ltd. and PPG Industries came up with AviProtek after studying spider silk. By injecting a design onto the surface of the glass that’s only visible to the outside, birds are able to spot it and take a different course. This is the perfect solution for high-rise buildings or buildings situated in forested areas. What’s more, they all come with a 10-year warranty so you know that the purchase is protected if anything happens.

Most people probably don’t realize that modern paint isn’t exactly eco-friendly, but that’s where German company ISPO comes in. Instead of buying your next batch at Walmart, why not consider going for the greener option? 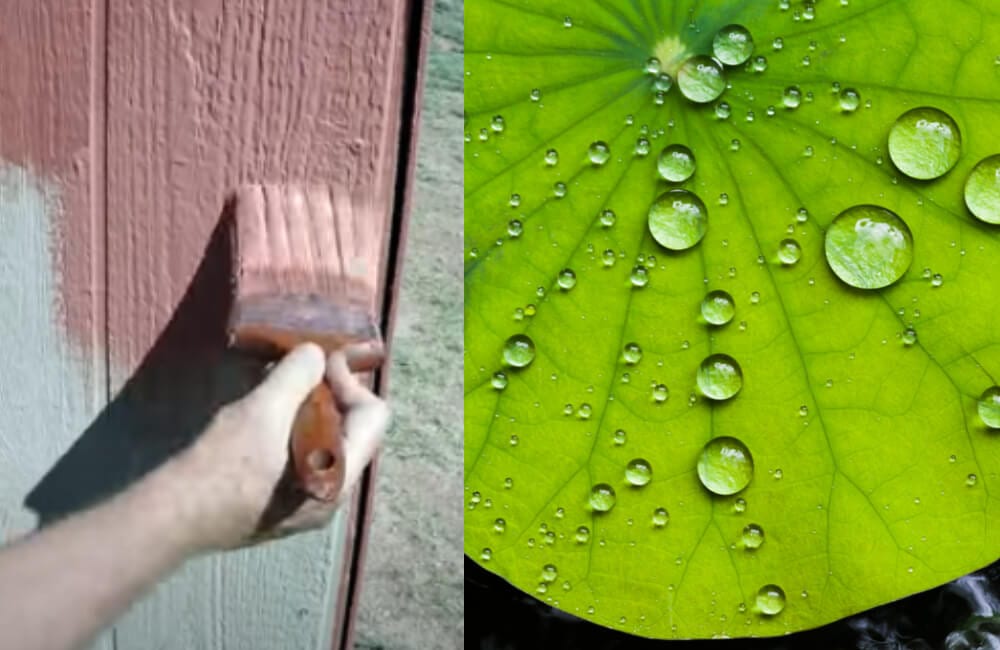 Inspired by lotus leaves, ISPO’s Lotusan paint has its own microstructure that is good for the environment, while also being less susceptible to clinging dirt and water. It certainly makes other house paints look a little bit less appealing, but it’s not widely available yet so it might be some time before it hits the market and really makes an impact.

Many companies across the world make and sell surgical needles, including Amazon. Most of us have been at the pointy end of one several times, but it’s not always a pleasant experience. In 2011, researchers at a Japanese university created a motorised needle designed to reduce pain, inspired by a mosquito’s proboscis. The needle is just as effective and far less painful than traditional hypodermic needles. Instead, the serrated edge is light enough that patients can barely feel it on impact. It isn’t entirely painless, but certainly less intimidating for those that are scared of needles.

You might be able to pick up a Speedo swimsuit at Dick’s, but have you ever really stopped to think about where the idea of a racing swimsuit came from? For professional swimmers, speed is everything. They’re forever thinking about how they can knock some seconds off their time, so when Speedo dropped their Fastskin line back in the 2000s, it seemed like a perfect idea. Based on the sandpaper-like skin of a shark which is supposed to make them swim faster, the stretchy fabric is very high-tech and built for speed. Most of the world’s fastest swimmers wear a version of this type of suit.

A surface that is super-slippery may not be practical in everyday life, but when it comes to biomedical pursuits, it’s an ideal status. Scientists at the Wyss Institute studied pitcher plants, watching how insects slid off the surface and into the mucus. Soon they came up with Slippery Liquid Porous Surfaces (SLIPS). “We envision the use of these surfaces for biomedical fluid handling, for fuel transport, and as a surface that repels ice and can therefore be used to reduce energy in refrigeration,” Joanna Aizenberg told C&EN. Companies ranging from BP to Procter & Gamble could benefit.

Every comic book fan has wondered what it would be like to be Spider-Man at least once, so when one talented Stanford University student came up with Gecko Toes back in 2016, it was a small miracle. Elliot Hawkes’ Gecko Gloves use 24 synthetic adhesive tiles that are able to hold a large amount of weight. Most incredible of all, the tech can physically allow a wearer the ability to “grip” a glass surface – and even lift their body weights while holding tight onto the glass. Not unlike Tom Cruise’s iconic death-defying stunt in Mission: Impossible 4.

The 25 Biggest Fines In Sports History
Athletes aren’t the only ones in the professional sports industry who must remain well-behaved. Coaches and owners are also held accountable for wrong-doings and mindless acts. Whether they’re breaking expensive equipment, league protocol, or the law, there’s always some reason sports industry folks are making headlines.  From billionaire pocket change to sums that could buy […]
These Are The Used Cars Most Likely To Become Coveted Collectibles
What makes a car a collectible? The general consensus is that a car that is twenty-five years or older is eligible for “collectible status,” but age isn’t the only factor that makes a car a classic. Some vehicles are relegated to the history books without any fanfare, while others become rare, pricey must-haves that collectors […]
Amazing Things From The 80s Our Kids Are Missing Out On
Anyone who experienced the 80s can vouch that it was a weird and exciting time in America. Michael Jackson was topping the charts with countless tracks from his Thriller and Bad albums. Glam rock was in full swing, which meant hair was big, make-up was overdone, and clothing was bright beyond belief. Whether you look […]
The Weirdest, Most Wonderful and Expensive Things Found in the USA
America. The home of the free, the land of the brave, and the country with some of the strangest things found anywhere on Earth. People travel from all over the world to see the weird and wonderfully odd things America has to offer.  Whether you’re looking to indulge in a $1,000 golden sundae, visit the […]
Advertisement