When it comes to pure military technological power, America’s armed forces are second to none. The U.S. government has invested billions in researching, developing, and perfecting America’s arsenal with the latest advanced tech, in a move that many say is priceless. The USS Gerald R. Ford is the pinnacle of all that hard work (and money) in action.

Built by Newport News Shipbuilding, and with a $13 billion price tag, the USS Gerald R. Ford is easily one of the military’s most expensive ships in its enormous fleet. Feast your eyes on what the latest American military minds have come up with – along with some of the other most expensive vehicles at the disposal of the U.S. military.

After a series of trials and tests, the eye-popping ship was officially commissioned on July 22, 2017, in Norfolk, Virginia, with a $5.1 billion dollar contract the government signed with Northrop Grumman

The commissioning of a vessel isn’t done by a stamp on a piece of paper, but a large, traditional ceremony that marks the start of active service. It was the daughter of President Ford, Susan Bales Ford, who gave the official order that day to “bring her to life.” 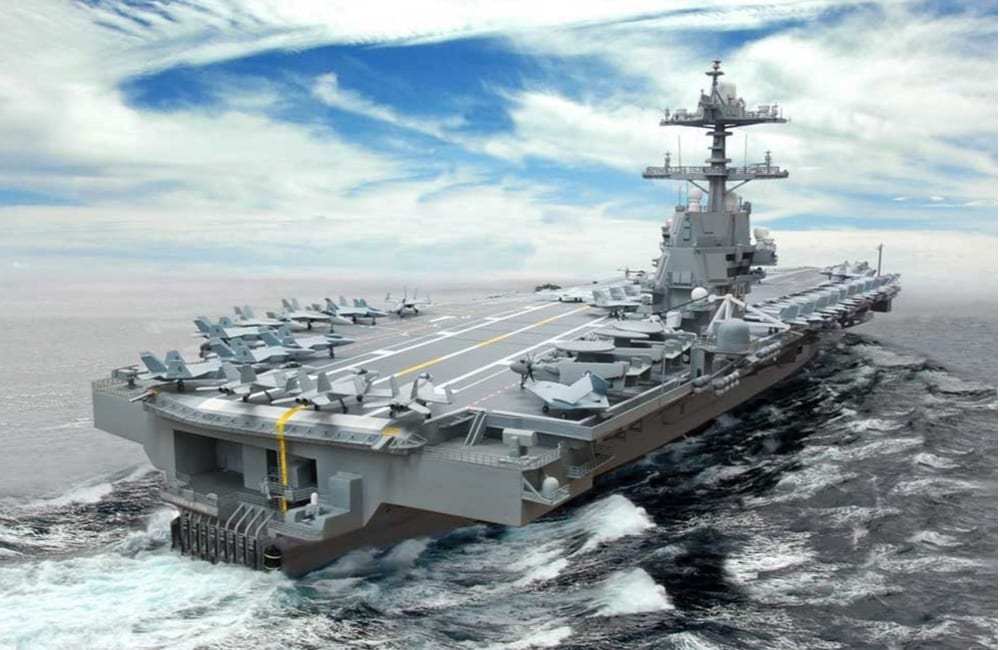 Rendering of the USS Gerald Ford Before Construction @Headline_ws / Twitter.com

On her mark, sailors on the ship took their positions and gave an inspiring salute. President Ford served as the 38th president of the United States from 1974 to 1977.

With a price tag of a whopping $12.8 billion, the carrier is finally completed at the Newport News Shipbuilding facility, and slated to begin active service around 2021.

Years of scrupulous, demanding trials are needed before it can be given the final stamp of approval. These trails aren’t cheap, either, tacking on a further $780 million onto the overall cost of the USS Gerald Ford. 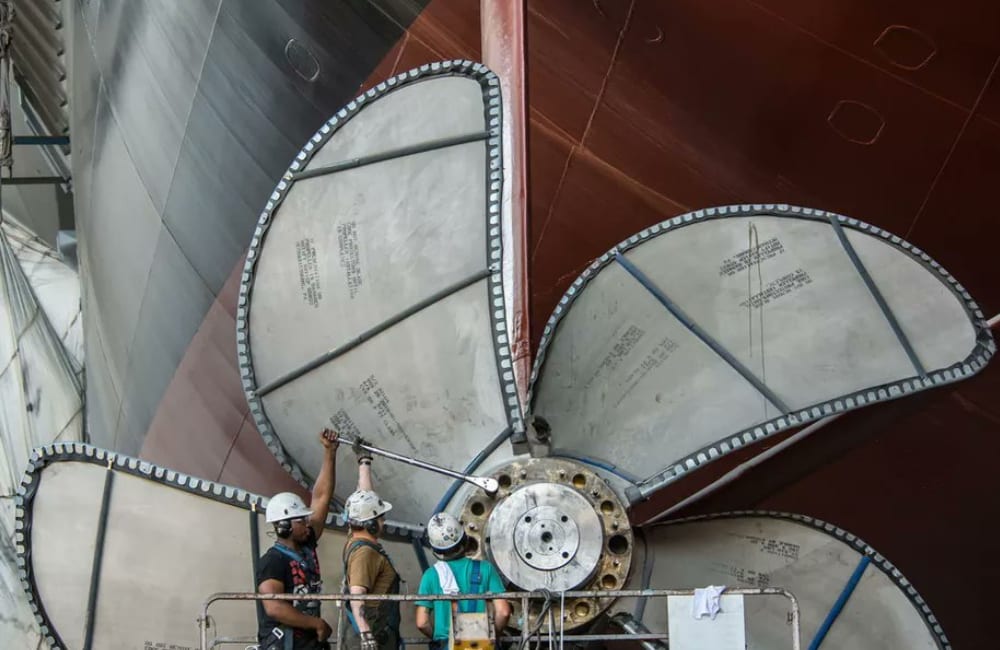 It’s not hard to see why it’s been dubbed a reminder of “America’s might.” At 1,106 feet long and 250 feet high, it’s one of the most impressive engineering conquests of our time.

The Navy had originally expected the USS Gerald Ford to join the rest of the fleet much earlier, but an unexpected (and expensive) snag delayed schedule by several months.

The problem involved an overhaul of the vessel’s propulsion system – which, as it turned out, is nuclear-powered. This made repairs especially tedious, and added millions to the ship’s price tag. 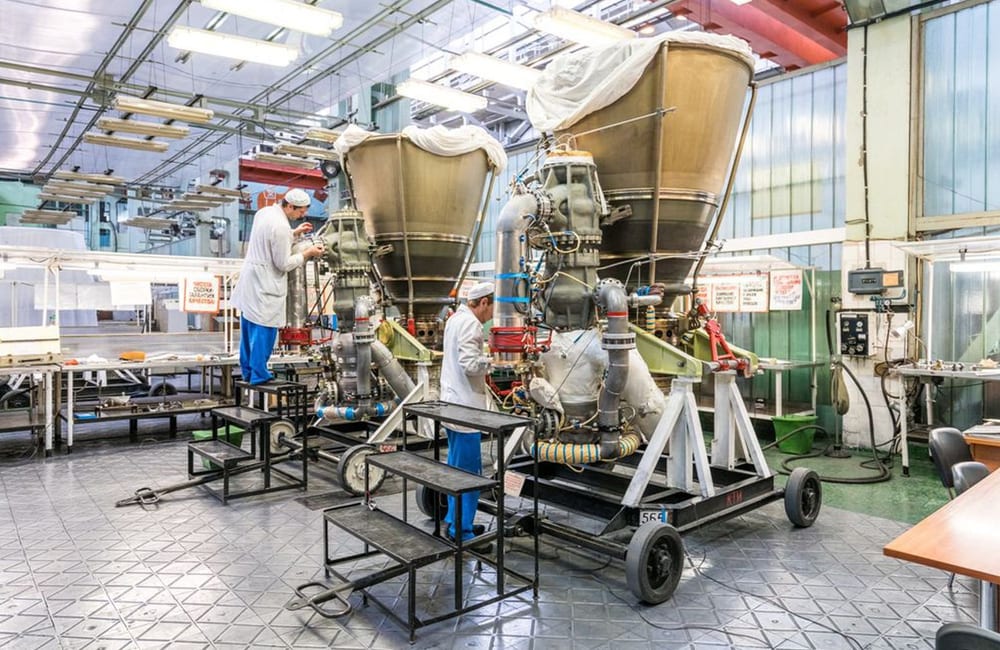 When sea trials didn’t clear their expected performance rates, Navy engineers realized there was a problem with the Ford’s twin-nuclear reactor system that powers its turbine generators.

One of the classic duties of any Naval aircraft carrier is its ability to… Well, carry aircraft. The US has a large fleet of military planes, many of which are made by Lockheed Martin Corporation and Boeing, as well as a few others.

Given the United States’ need for an expansive and all-reaching military presence, the USS Gerald Ford comes with some key improvements to its flight deck for maximum capacity. 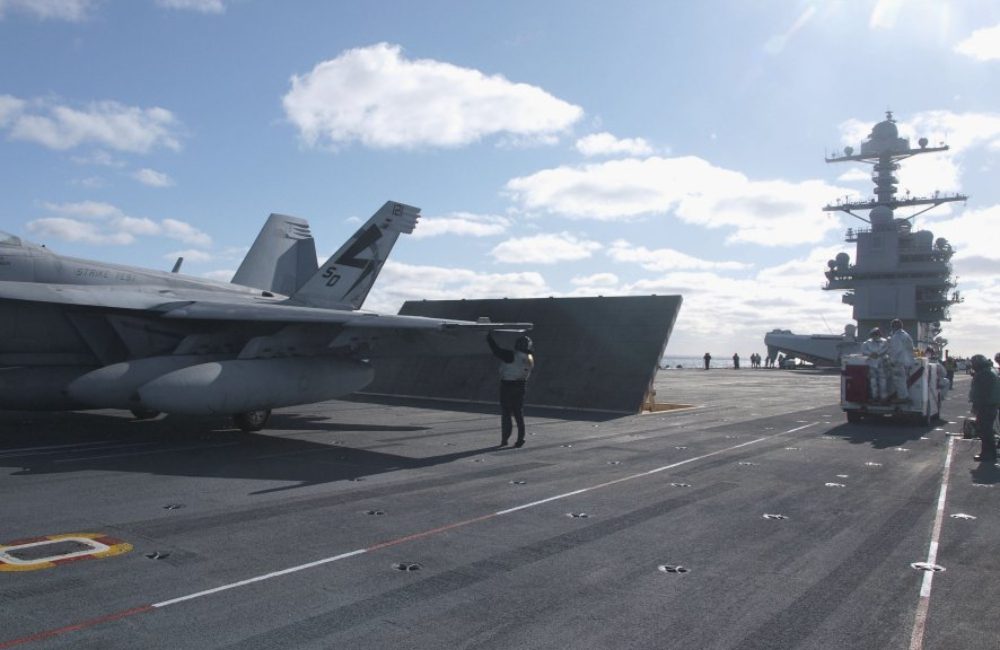 For one, the entire shape of the island has been overhauled to fit physically more jets. The elevators have been reshuffled to boost space efficiency, and new tech improvements means fewer crew hands are needed to get planes in and out of the sky.

Another key tech improvement unique to the USS Gerald Ford is its cutting-edge aircraft launch system, which can propel the Lockheed and Boeing-made American jets into the sky faster than any system prior.

Dubbed the EMALS (Electromagnetic Aircraft Launch System), it works like a souped-up slingshot with magnets. 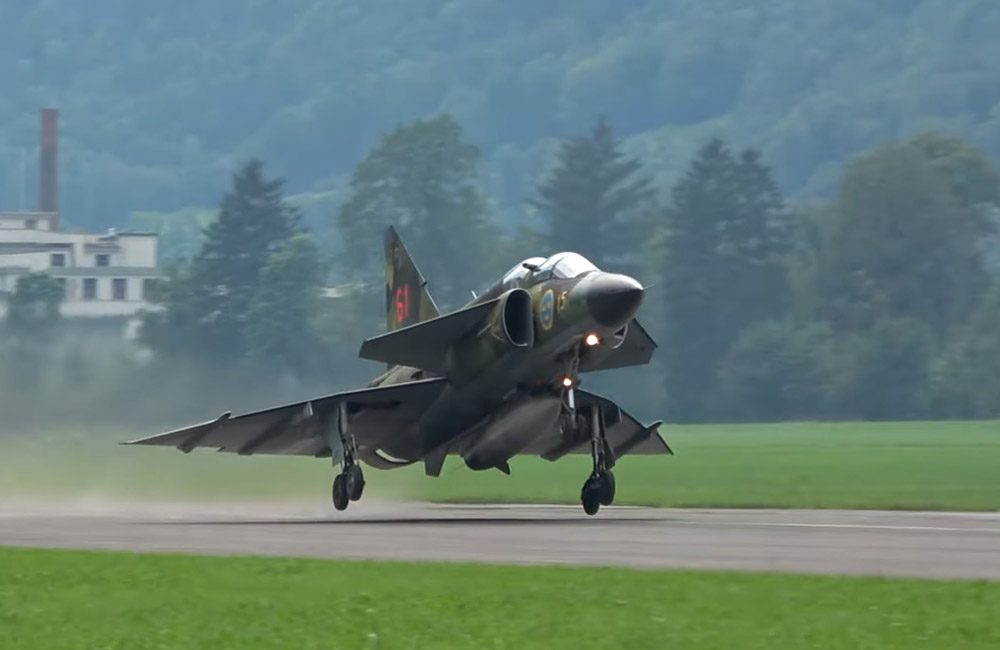 More importantly, the EMALS also improves the safety of takeoff and reduces damage to aircraft as they launch. When every plane costs millions – if not billions – of dollars, that’s certainly a much-needed improvement.

For anyone who’s watched Top Gun, you probably already know that the only thing more dangerous than taking off from an aircraft carrier is landing on one.

But the USS Gerald Ford’s newest landing system is the Navy’s safest yet for high-velocity landings at sea. Like its launching system, this new landing system (known as the Advanced Arresting Gear, or AAG) is a total overhaul from previous methods. 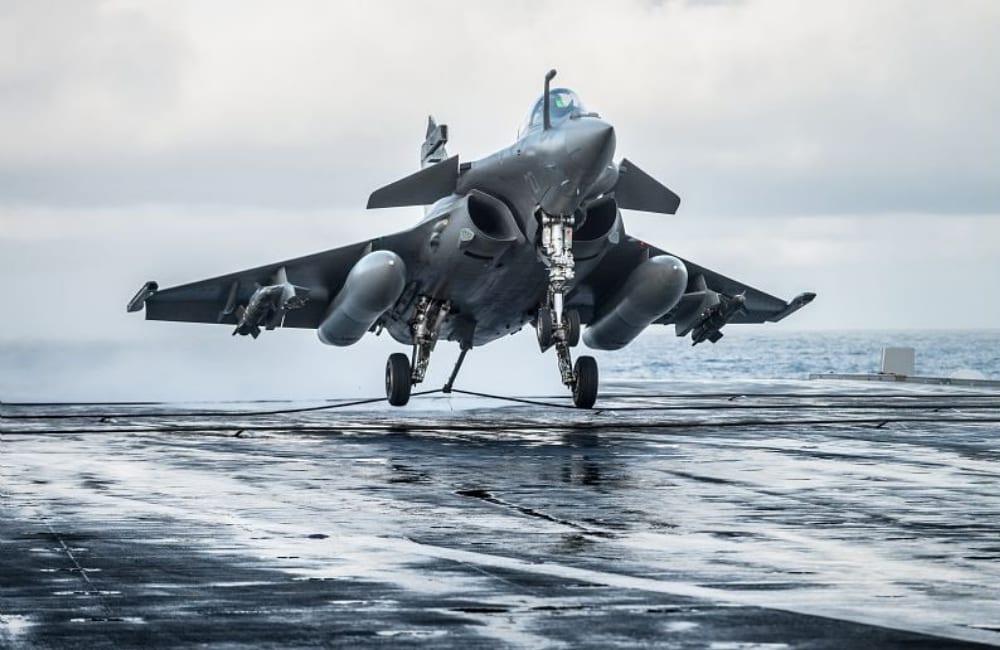 It uses electromagnets to detect, track and “catch” landing aircraft with hydraulic precision for maximum flexibility and safety. Damage to landing aircraft is expected to be the least-severe yet, which will save millions and even billions of dollars in the future.

In the event of emergencies, designers thought ahead and installed the USS Gerald Ford with some of the most cutting-edge facilities on Earth in terms of medical care and emergency control.

To that end, the ship has an entire mini-hospital within its hull. This includes a small 41-bed ward, an ICU, a lab, and even its own onboard pharmacy, all at great cost as each thing needs to be to exact specifications. 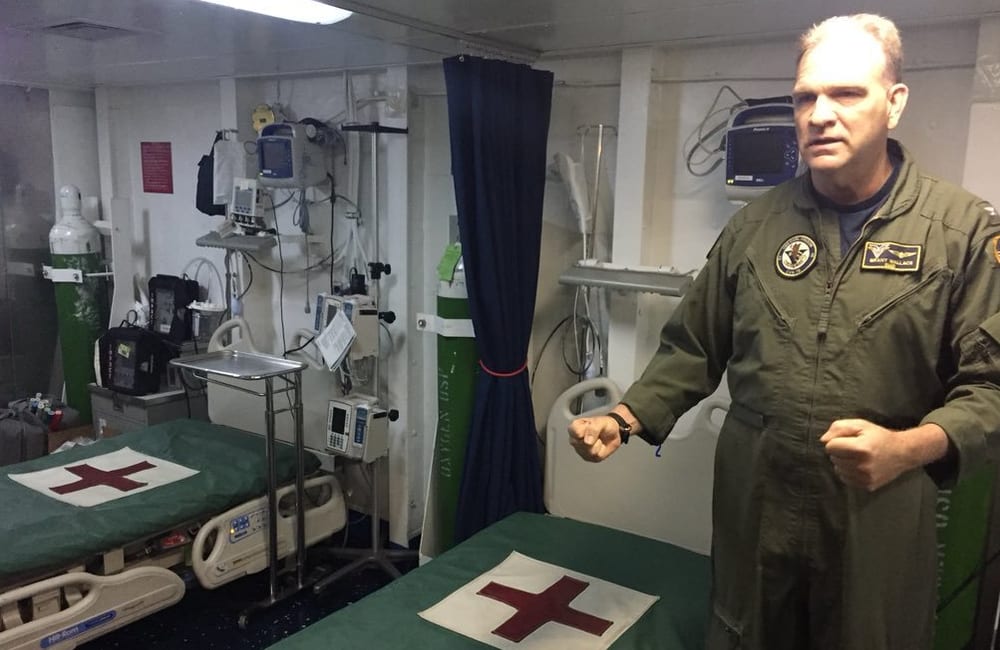 Medical Room in a US Navy Aircraft Carrier @rongagalac / Twitter.com

At least 40 crew members on deck are trained medical officers – so there’s always a doctor in the house.

Given the ship’s unique design for maximum efficiency and aircraft capacity, it probably goes without saying that it requires a large crew to operate the USS Gerald Ford.

But how big are we talking? The Navy says that the ship will accommodate roughly 2,600 crew members while the ship is at sea. 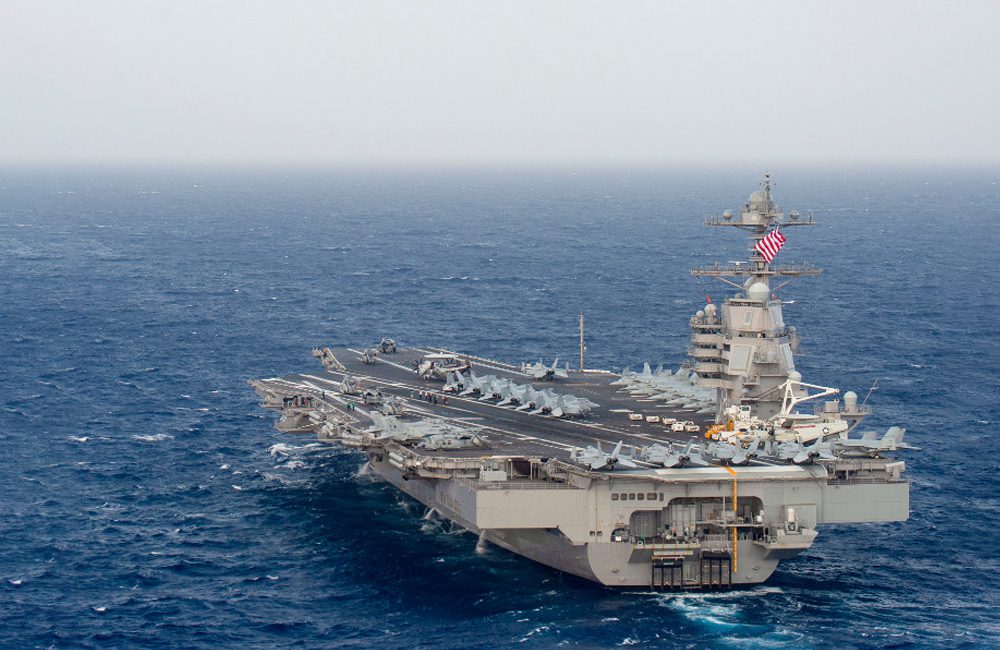 While this is akin to the size of a small city, it’s actually significantly less people than similar aircraft carriers in the same class. Your average Navy carrier actually has room for about 3,200 crew members.

But what is it like to actually live on this thing? Well along with a plethora of advanced new military tech, the USS Gerald Ford is also outfitted to be the Navy’s most comfortable aircraft carrier as well.

Though sleeping space is purposely small for maximum safety and space, the amenities are in a class of their own. This includes personal locker space, space-age shower systems, gender-neutral bathrooms, Wifi and plenty of recreational space, all manufactured by Northrop Grumman

While not all sailors are stationed on deck, it goes without saying that the view at sea is probably among one of the best in the world, too.

Some of these are things the Navy hasn’t even dreamt up yet – but others are advances that engineers probably expect will become a reality soon.
Chief among these upgrades is the military’s still-in-development laser-based defense system, which will be able to literally blast enemy projectiles out of the sky with a laser. 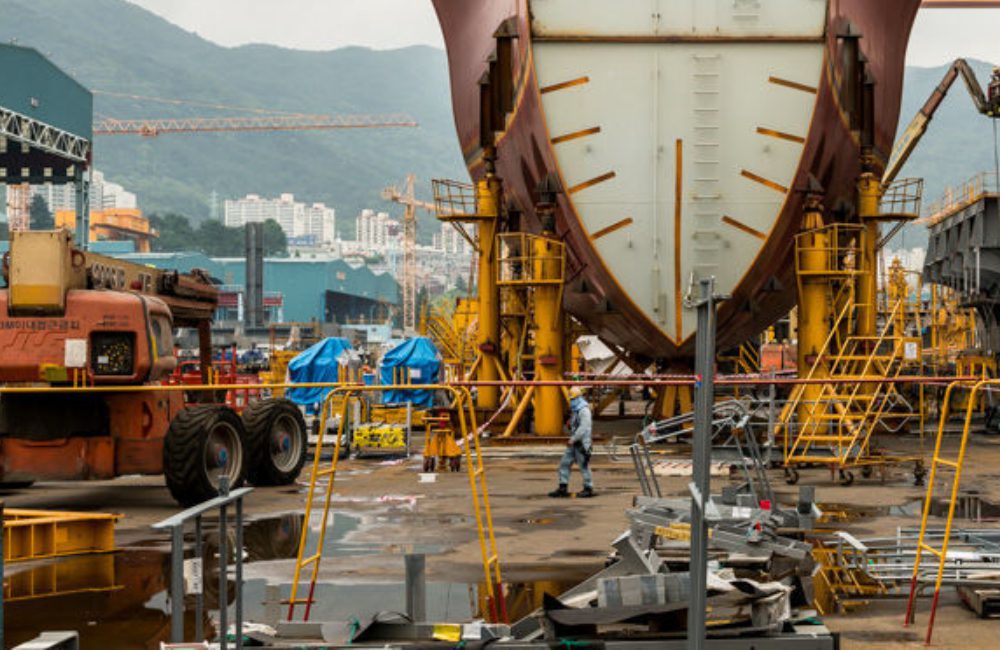 Armor improvements and systems upgrades will also be easily added to the USS Gerald Ford thanks to good old-fashioned advanced planning.

With 25 floors to man, it’s hardly surprising that the USS Gerald R. Ford will need an ample amount of staff. With thousands of people onboard making sure everything runs smoothly, there needs to be the opportunity for downtime, too.

Previous designs were updated and improved upon to ensure better quality-of-life for all workers. Sleeping quarters have been refined to make them quieter, while there are several recreation areas to blow of steam outside of the engine room. 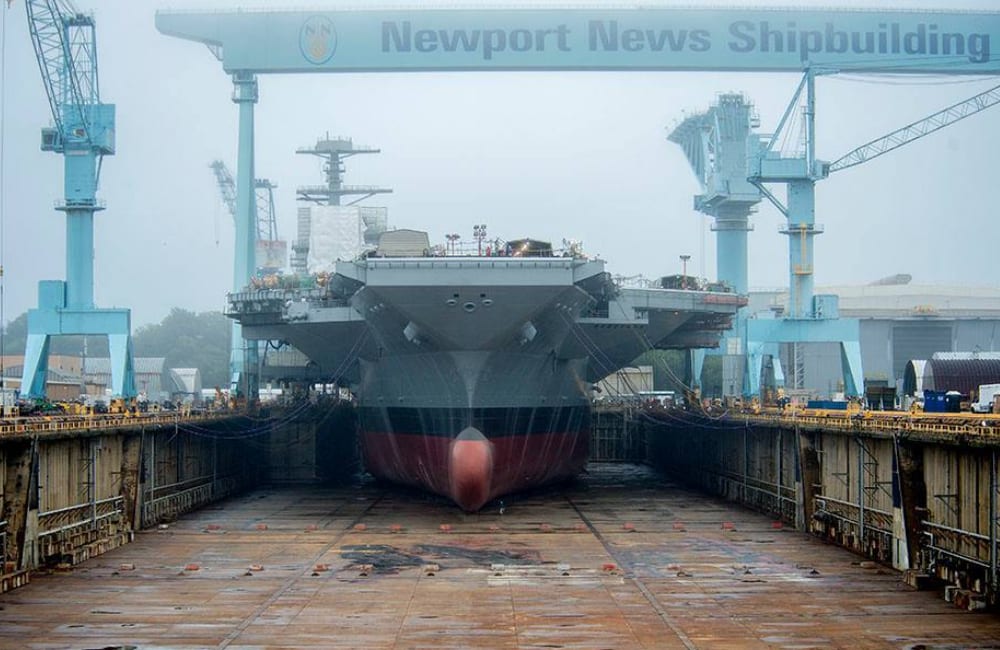 Gymnasiums are well-equipped with the latest tech, and the air conditioning has been upgraded to ensure everyone keeps their cool on those long shifts. What other crafts have the U.S. paid through the nose for in the past?

Unlike past projects, engineers and designers conceived the entire blueprint and layout of the USS Gerald Ford using a full-scale 3D computer-generated model of the ship.

This includes a scale recreation of every last room, cell, closet and bathroom aboard this massive project. But this revolutionary design feature allowed engineers to come up with all kinds of new additions unique to the USS Gerald Ford. 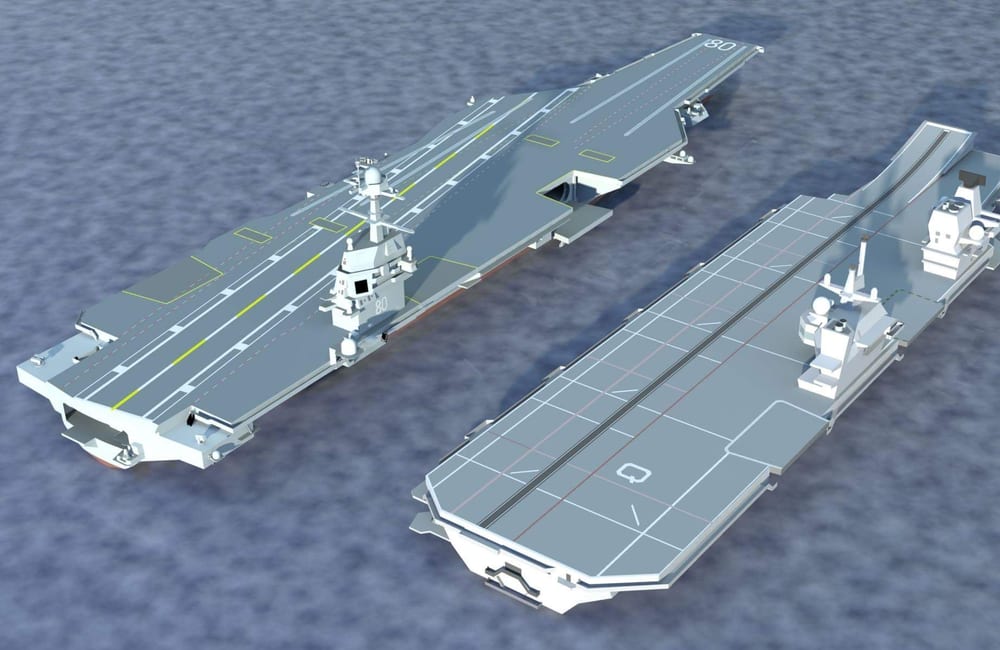 For example, this 3D modeling process gave engineers the inspiration to design a modular room system within the ship’s hull – meaning that when future upgrades arrive, things can be re-shuffled easily like LEGOs.

If you’re looking for a state-of-the-art radar that can spot threats from miles away or comms that can withstand almost anything, then the Grumman E-2D Advanced Hawkeye is your guy. Coming in at a cool $232 million, it’s a carrier-capable flying machine. America isn’t the only army to use this tactical airborne early warning plane, though. 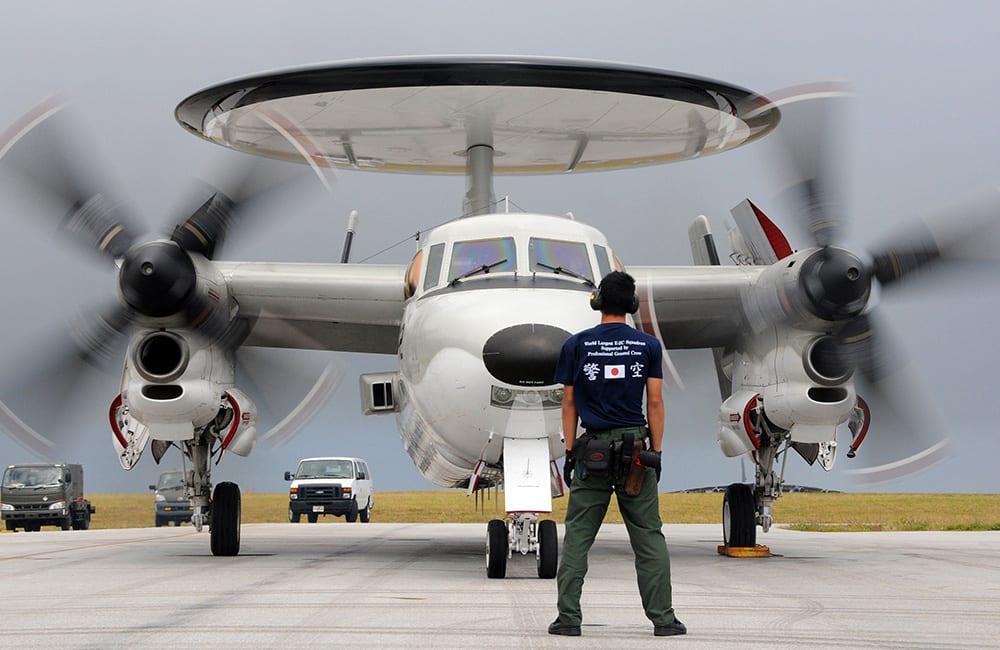 The E-2D, nicknamed “Super Fudd,” is also part of the arsenal in Taiwan, Singapore, Mexico, Japan, Israel, France, and Egypt. It’s so functional that several different countries couldn’t wait to get their hands on it – and with abilities like that, it’s clearly money well spent.

As we know from the USS Gerald R. Ford, size matters. The Boeing C17A Globemaster III is one of the world’s elite military transport planes. Not only can it haul weapons and equipment around the world in a pinch, but it can pack up to 102 soldiers in a single trip. 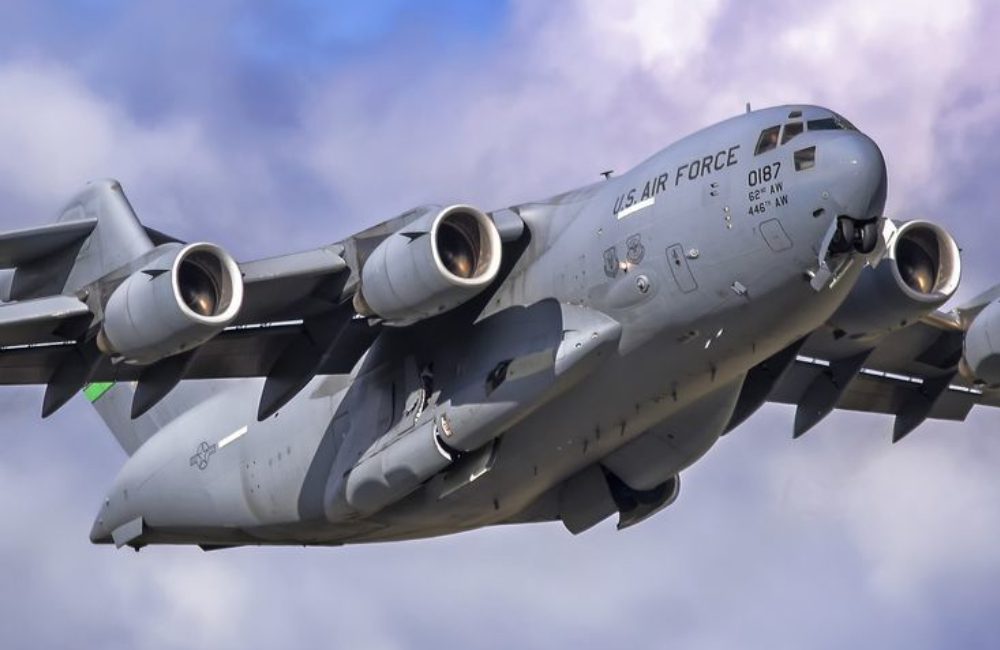 Tanks and Humvees can also be stowed away in its hold, making the Globemaster III a force to be reckoned with and a sheer powerhouse titan. Several countries use the masterful plane, though production was ceased on this particular model as of 2015.